TARLETON, a village, a parish, and a sub-district, in Ormskirk district, Lancashire. The village stands on the river Douglas, 2½ miles WNW of Croston r. station, and 8 NNE of Ormskirk; and has a post-office under Preston. The parish is cut into three divisions, and comprises 5,405 acres. Real property, £8,081. Pop., 1,987. Houses, 365. The manor belongs to Sir T. G. Hesketh, Bart., and Lord Lilford. The living is a rectory in the diocese of Manchester. Value, £960.* Patron, the Rev. M. Fletcher. The church is a plain brick building. A national school at Mere-Brow is used as a chapel of ease. There are three Methodist chapels, an endowed school with £29 a year, a school of industry, and charities £8. The sub-district contains 20 parishes. Acres, 12,139. Pop., 3,656. Houses, 667.

Details about the census records, and indexes for Tarleton.

The Register Office covering the Tarleton area is West Lancashire.

You can see pictures of Tarleton which are provided by:

"TARLETON, a parish in the hundred of Leyland, county Lancaster, 8 miles N.E. of Ormskirk, and 9½ S.W. of Preston. Chorley is its post town. The village is situated on the river Douglas, near Tarleton Moss. This parish, formerly a chapelry in the parish of Croston, is separated into three divisions, viz:, Tarleton, Holmes, and Sollom. The soil is loamy and moss, with a subsoil of clay. The living is a rectoryin the diocese of Manchester, value £800. The church, dedicated to St. John or St. Mary, was rebuilt in 1719. The parochial charities produce about £37 per annum, of which £29 go to a school. There are a school of industry and an infant school. The parish is skirted by the Leeds and Liverpool canal. Sir T. G. Hesketh, Bart., of Rufford Hall, and G. A. L. Keck, Esq., of Bank Hall, are lords of the manor. Fairs are held on the 23rd and 24th April."

You can see the administrative areas in which Tarleton has been placed at times in the past. Select one to see a link to a map of that particular area. 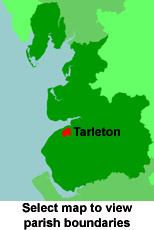 View maps of Tarleton and places within its boundaries.