TATHAM, a parish in Lancaster district, Lancashire; 1 mile SE of Wennington r. station, and 4½ E of Hornby. It includes Tatham-Fell chapelry, and its Post town is Wray under Lancaster. Acres, 8,501. Real property, £5,519. Pop., 588. Houses, 115. The property is much subdivided. The living is a rectory in the diocese of Manchester. Value, £300. Patron, J. Foster, Esq. The church is later English.

Details about the census records, and indexes for Tatham.

The registers of the parish church, St James the Less, have been published by the Lancashire Parish Register Society as follows.

The Register Office covering the Tatham area is Lancaster.

You can see pictures of Tatham which are provided by:

"TATHAM, a parish in the hundred of Lonsdale South of the Sands, county Lancaster, 12 miles N.E. of Lancaster, its post town, and 1 mile from the Wennington railway station. The village, which is considerable, is situated on the river Lune or Weaning. The parish includes the villages of Lowgill and Tatham Fell. There are some collieries, and traces of a Roman road. The living is a rectory in the diocese of Manchester, value £300. The church, dedicated to St. James, is an ancient structure with a steeple, erected in 1722, containing three bells. In the interior is a brass to the Cansfield family. There is also the district church of Tatham Fell, the living of which is a perpetual curacy, value £125. The parochial charities produce about £28 per annum. There is an endowed school. A manor court is held in May, at Hall Barns."

TATHAM-FELL, a chapelry, with Lowgill village, in Tatham parish, Lancashire; 2½ miles S by W of High Bentham r. station, and 5 ESE of Hornby. Post town, Wray, under Lancaster. The living is a p. curacy in the diocese of Manchester. Value, £125. Patron, the Rector of Tatham. The church was built in 1745. There is a parochial school.

You can see the administrative areas in which Tatham has been placed at times in the past. Select one to see a link to a map of that particular area. 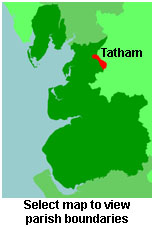 View maps of Tatham and places within its boundaries.