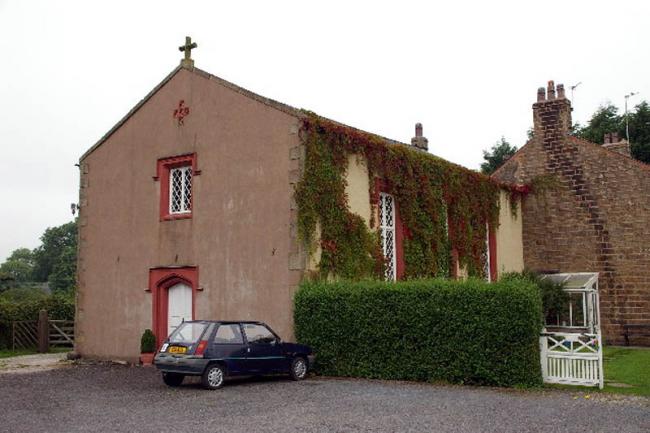 © Copyright Alexander P Kapp and licensed for reuse under this Creative Commons Licence.

Mass was celebrated in the attic of a farmhouse from 1738. A chapel was eventually built onto the side of the farmhouse in the 1820's. The mission was interdicted in 1841-1859, then reopened and run by the Benedictines between 1859 and 1936, when it was then taken over by the Diocese. The Parish was closed in 1991 but the buildings are still used for pastoral purposes.

This very ancient mission was founded in 1738, although there is every likelihood that Mass was said here in the old farmhouse at an earlier periods. There are still parts left of the old sixteenth-century farmhouse, very low built, and an attic which is supposed to have been a hiding place. A tiny cupboard, in the sacristy looks like a rough tabernacle.

The parish was founded by a yeoman farmer, Thomas Eccles of Lee House, who left land and farms in trust for the use of "a Friar or Friar Minor of the order of St. Francis of the English province to live and officiate at the Lee House and to have a chapel there, and that all the church stuff for the priest and altar, and my book of Religion may be preserved at the Lee House, and that the priest be not absent more than one week in the month."

The first priest known to have served here was Father Germain (Germanus) Helme, O.S.F. This Confessor of the Faith came of an old Goosnargh family, residing chiefly at Church House, Goosnargh, and another branch of the family was at Blackmoss in Chipping, not far from the place where the revered Confessor lived for many years as a priest. Father Helme, a member of the Franciscan order, served the Catholic mission of Goosnagh and of Lee House, founded in 1738 by a Catholic Non-Juror, Thomas Eccles. After the 1745 rebellion there was a renewed attack against Lancashire Catholics, who were accused of supporting the Stuart rebels. A mob came out and arrested the priest of Lee House. He was taken to Lancaster castle. There after four months he died. Anyone who has visited the dungeons at Lancaster, deprived of air, light, and sanitation, need not feel surprise that a prisoner should perish under such appalling conditions. Yet one chronicle suggests that Fr. Helme may have been poisoned by a malevolent woman. He is probably the last Catholic of the diocese to suffer grievously under the penal laws.

The Franciscans served here until 1826.

A pupil of Fr. Trappes, William Riddell of the old Border family of Cheesburn Grange, Northumberland died here in 1830 and lies buried near the gospel side of the altar.

This isolated little parish has managed to struggle along in spite of the small number of Catholics living inside its boundaries since the establishment of the parish at Longridge. Its tiny graveyard probably houses more Catholic dead than any similar place in the land.

An old tradition, which no doubt goes right back to the days of persecution, states that when Mass was to be said at Lee House the washing was hung out in a certain field. This signal could be observed from farms on the hillside around, often several miles away, and then word would be passed from neighbour to neighbour that the priest was in the district.