THORNTON, a chapelry and a township in Poulton-le-Fylde parish, Lancashire. The chapelry adjoins Fleetwood town and r. station, and has a post-office under Preston. Pop., 826. The living is a p. curacy in the diocese of Manchester. Value, £105. Patrons, Trustees. The church was built in 1835. There are a Wesleyan chapel and a free school. The township includes Fleetwood, and is noticed in our article on that town.

Details about the census records, and indexes for Thornton.

The Register Office covering the Thornton area is Blackpool & Fylde.

You can see pictures of Thornton which are provided by:

"THORNTON, a township in the parish of Poulton-le-Fylde, hundred of Amounderness, county Lancaster, 2 miles N.E. of Poulton, its post town and railway station. The township, which is extensive, is situated oil the Preston railway and the river Wyre, and includes the new town and port of Fleetwood [which see]. The lands on which the town is built were, prior to 1836, one wild tract of rabbit warren, but through the enterprise of Sir Peter Hesketh Fleetwood, Bart., have been transformed into a populous and thriving district, with harbour and docks, the plan of which was laid down by Decimus Burton, of London, architect. The township is bounded on the N. by Lancaster and Morecombe Bay, and on the E. and S. by the river Wyre. The living is a perpetual curacy in the diocese of Manchester, value £105, in the patronage of trustees. The church has a stained E. window. Rossall is now converted into a collegiate school."

In 1835 Thornton was a township in the parish of Poulton le Fylde.

You can see the administrative areas in which Thornton has been placed at times in the past. Select one to see a link to a map of that particular area. 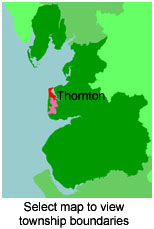 View maps of Thornton and places within its boundaries.