THURNHAM, a township in Lancaster and Cockerham parishes, Lancashire; 4½ miles SSW of Lancaster. Acres, 1,219. Real property, £3,345. Pop., 717. Houses, 121. Much of the land belongs to Sir J. Fitzgerald, Bart. T. Hall is an ancient mansion. There are a handsome Roman Catholic chapel and an endowed school.

Details about the census records, and indexes for Thurnham.

The Register Office covering the Thurnham area is Lancaster.

You can see pictures of Thurnham which are provided by:

"THURNHAM, a township in the parishes of Lancaster and Cockerham, hundred of Lonsdale South of the Sands, county Lancaster, 4½ miles S.W. of Lancaster, its post town. The village is situated where the branch canal joins the river Lune, and contains the harbour of Lancaster called Glasson Dock; this last was constructed in 1787, and capable of containing 25 merchant vessels. A considerable traffic is carried on. Within the township are the remains of Cockersand Abbey, situated on a neck of land projecting into the sea, and adjoining the Cocker Sands, from which the abbey derived its name. The ruins consist of an octagonal chapter-house, with a roof supported on a single central column, now the sepulchral chapel of the Daltons. The Roman Catholics have a chapel and a school."

"CROOK-FARMS, a hamlet in the township of Thurnham, parishes of Lancaster and Cockerham, in the county of Lancaster, 4 miles S.S.W. of Lancaster. It is situated near the river Lune."

"GLASSON, an ecclesiastical district in the parishes of Lancaster and Cockerham, hundred of Lonsdale, county palatine of Lancaster, 5 miles S.W. of Lancaster, its post town. The Galgate station on the London and North-Western line of railway is about 3 miles S.E. of the village. It includes the township of Thurnham, also part of that of Ashton-cum-Stodday. Here are good docks capable of accommodating vessels not exceeding 400 tons burthen, The principal employments are in connection with the shipping. The living is a perpetual curacy in the diocese of Manchester, value £100, in the patronage of trustees. Christ Church is a plain stone edifice. There is a parochial school possessing an endowment of £10 per annum. Miss Elizabeth Dalton is lady of the manor. Within the limits of the district are several small places, which are extra parochial."

In 1835 Thurnham was a township in the parish of Cockerham.

You can see the administrative areas in which Thurnham has been placed at times in the past. Select one to see a link to a map of that particular area. 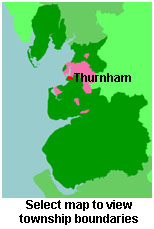 View maps of Thurnham and places within its boundaries.