Details about the census records, and indexes for Tockholes.

The Register Office covering the Tockholes area is Blackburn.

You can see pictures of Tockholes which are provided by:

"TOCKHOLES, a township and chapelry in the parish and hundred of Blackburn, county Lancaster, 3 miles S.W. of Blackburn, its post town, and 7 from Chorley. The village is situated near the Leeds and Liverpool canal, and the road from Blackburn to Manchester. In the valley of the Raddlesworth rivulet the soil is principally marl, but a considerable portion of the upland is in moorland. Many of the inhabitants are employed in the weaving of cotton and in the print-works. The living is a perpetual curacy in the diocese of Manchester, value £150, in the patronage of the Vicar of Blackburn. The church, dedicated to St. Michael, was rebuilt in 1833. The parochial charities produce about £1 per annum. There is a National school, at which a Sunday-school is also held. The Independents have a chapel. The representatives of the late E. Shorrock, Esq., are lords oft] a manor. It is supposed to have been the scene of a skirmish between the royalists and parliamentarians in the reign of Charles I., from the number of cannon-balls found here."

In 1835 Tockholes was a chapelry and township in the parish of Blackburn.

You can see the administrative areas in which Tockholes has been placed at times in the past. Select one to see a link to a map of that particular area. 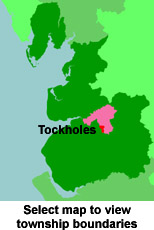 View maps of Tockholes and places within its boundaries.