Todmorden with Walsden was in Lancashire prior to 1888, and after that became part of Yorkshire. See also Halifax.

The following books contain useful information about the history of Todmorden and the surrounding area.

Details about the census records, and indexes for Todmorden with Walsden.

A picture of St Peter's, Walsden.

The Register Office covering the Todmorden area is Calderdale.

You can see pictures of Todmorden with Walsden which are provided by:

"WALSDEN, a hamlet in the parish of Rochdale, hundred of Salford, county Lancaster, 5 miles N.E. of Rochdale, its post town, and 10 from Burnley. It is a station on the Leeds section of the Lancashire and Yorkshire railway. It is joined with Todmorden. There are cotton-mills, collieries, stone-quarries, and chemical works, which afford employment to the chief portion of the inhabitants. The soil is clayey, with a rocky subsoil. A portion of the Roman road from Manchester to York passes through this parish. The living is a perpetual curacy in the diocese of Manchester, value £150, in the patronage of the crown and bishop alternately. The church is dedicated to St. Peter. There is a parochial school for both sexes. J. Dearden, Esq., is lord of the manor."

Genealogical and historical information about Todmorden and Walsden.

In 1835 Todmorden with Walsden was a township in the parish of Rochdale. Prior to 1888 this township and half of the town of Todmorden was in Lancashire, the other half being in the West Riding of Yorkshire. From 1 January 1888 all of Todmorden became part of Yorkshire.

You can see the administrative areas in which Todmorden with Walsden has been placed at times in the past. Select one to see a link to a map of that particular area. 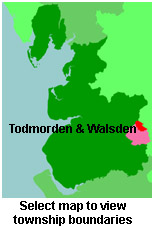