Details about the census records, and indexes for Toxteth Park.

The Register Office covering the Toxteth Park area is Liverpool.

You can see pictures of Toxteth Park which are provided by:

"TOXTETH PARK, an extra parochial liberty in the borough of Liverpool and hundred of West Derby, county Lancaster, 1 mile S.E. of Liverpool, of which it is a large suburb. The manor came from the crown to the Stanleys and Molyneuxs of Croxteth, and was dis-parked in 1591. [See Liverpool.]"

"OTTERSPOOL, a station in the parish of Toxteth Park, S.E. Lancashire, 2¾ miles S.E. of the Central Station in Liverpool; it is on the Warrington section of the Manchester, Sheffield, and Lincolnshire railway."

You can see the administrative areas in which Toxteth Park has been placed at times in the past. Select one to see a link to a map of that particular area. 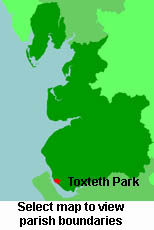 View maps of Toxteth Park and places within its boundaries.

The Workhouse site has an interesting description of Toxteth workhouse.