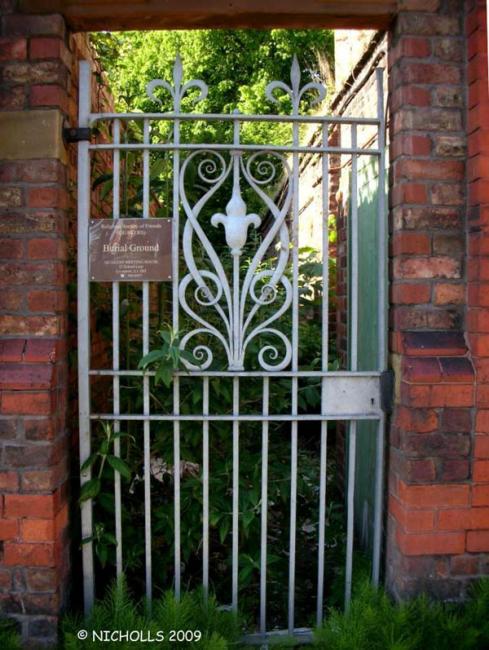 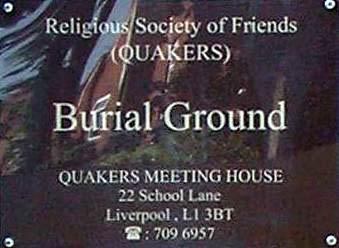 In 1791 the Liverpool Quakers built themselves a new Meeting house on Hunter Street which runs along the back of the Liverpool Museum, under the shadow of the flyover. This remained their home until 1941 when it was destroyed by a bomb. But long before 1941 the burial ground attached to the Meeting house had fallen into disuse because, in 1854, the Meeting received an order from the Privy Council forbidding it to make any more interments there, presumably it was felt to be a health hazard in a densely populated district in the middle of a cholera-prone town.

It took quite a long time for the Quakers to find a plot of suitable size reasonably close to the town but in 1859 they found one on what at first they refer to as Smithdown Lane though that name quickly gives way to Smithdown Road in the Minute Books. Toxteth Park Cemetery had opened nearby in 1856 but otherwise it was outside the built-up area of Liverpool. The Privy Council order was quite strict that the new burial ground should be at a distance from housing. The plot had a frontage of 80 yards on Smithdown Lane and extended back from this for about 100 yards. The Quakers paid £1200 for the land, with a dwelling house and barn on it and they set about having it drained and levelled.

The Quakers raised the money to pay for the burial ground by selling a previous Meeting house and burial ground which they still owned in Hackins Hey in the old part of Liverpool between Dale Street and Tithebarn Street. All the human remains were removed and reburied on the new site.

Two years later, in 1861, they built a Meeting house to seat 200 people on the site of the new burial ground and also built a cottage near the entrance for a caretaker. Presumably the existing house and barn were demolished. This Meeting house was to be used solely for funeral services. In October 1861 the new burial ground was declared ready for use and no further interments were made at Hunter Street. A caretaker was installed in the cottage to look after the building and grounds.

Three years after this, in 1864, the Committee which was in charge of the new burial ground received a request from some of the congregation that headstones should be permitted. In their earliest days in the 17th century the Quakers did not mark their graves in any way: if you go to the old Quaker burial ground in Bickerstaffe near Ormskirk, all you will see is a field. The location of each grave was marked on a carefully measured-up plan of the site and that was all. Later Friends allowed the use of gravestones laid flat over the grave and some of the older members of the Liverpool Quaker meeting today remember that this was how the burial ground at Hunter Street was.

After some consideration, it was agreed that vertical headstones would be allowed but they must all be of exactly the same shape and size with inscriptions in identical script, giving only the name of the deceased, his or her age and the date of death. In 1892 the Committee reported that, on more than one occasion, people had laid flowers and other more permanent decorations on the graves during funerals. This was felt to be out of keeping with the Quaker preference for plain living and the practice was discouraged.

The new Meeting house does not seem to have been particularly well built. It needed re-plastering quite early on; later the outside was rendered with cement because of damp and damage was done in gales in the 1870s and 1880s. Gradually it came to be used for purposes other than funerals. Sunday morning worship was held there in the summer months (as well as at Hunter Street) and it was used as a venue for public lectures by Quaker speakers. But it was always under-used and in 1888 the Preparative Meeting agreed that it should be let to the Presbyterians for their Sunday services (for £75 per annum) and this continued until 1897 when the Presbyterians acquired a church of their own. The Wesleyan Methodists then took their place until their lease expired in 1903. These were a congregation from Lodge Lane who wanted to expand in the area and eventually built Wellington Avenue Methodist Church. The Quakers continued to use it for funerals.

When the Wesleyans ended their tenancy, the Quakers had to decide whether they wanted to, or could afford to keep on an under-used building which needed heating and lighting and the services of a full-time resident caretaker. They decided they didn't and in 1906 sold more than half the site, the front part which had never been used for burials and which included the Meeting house and cottage. The buyers were the Guardians of the Poor of Toxteth Park who wanted to expand the Smithdown Institution which had been established as Smithdown Road Workhouse in 1859 and later became Sefton General Hospital. What remained is the burial ground as it is today.

Since, by this sale, Quakers lost their frontage on Smithdown Road, part of the agreement was that a pathway should be built at the back of the site giving pedestrian access onto what had, by then, become Arundel Avenue. The whole area around the graveyard must have become built up during the forty or fifty years since it was opened. Lack of vehicular access subsequently limited the accessibility and usefulness of the site. Hearses had to be parked on Arundel Avenue and coffins carried to the place of burial. A wall was also built across the middle of the site at the boundary of the burial ground and the land now belonging to the Guardians of the Poor.

As soon as the Meeting house was lost, the question arose as to where funeral services should now be held and there were negotiations with a Presbyterian church to use their Sunday School at the Smithdown Road entrance of Sefton Park. (This was presumably St. Columba's, Smithdown Gate, an offshoot of the Sefton Park Presbyterian Church in Brompton Avenue and established for the servants of the wealthy congregation there. Now it is a sheltered housing complex beside the Total Garage). The idea was also put forward to erect a corrugated iron building on the site and in 1908 such a building backing onto the new boundary wall was erected at a cost of £225

Presumably the Guardians of the Poor pulled down the Meeting house and, in the course of their new building work, uncovered human remains thought to have been the bones dug up in Hackins Hey in 1864 and thus, as no burials had taken place there for over 60 years before that, 100 to 150 years old. They were reburied in the burial ground under the supervision of the Medical Officer of Health for Liverpool and the location was marked this time.

In 1909, with the increasing prevalence of cremation, a columbarium was added, a wall with a number of niches into which urns containing ashes could be sealed.

Gradually the Meeting house became more extensively used. It became the home of a separate Quaker congregation in 1921 and during the 1950s and 1960s had quite a hey-day as a venue for Quaker social events and young people's activities. The graveyard became filled to capacity and fewer and fewer interments took place there, the last as far as is known, in 1961.

Disaster struck in 1977 when an electrical fault caused a fire which virtually demolished the building. What remained of it was pulled down and, since then, the burial ground has remained unused except for the interment of ashes in already existing graves. Urns are still occasionally placed in the columbarium and ashes are scattered and it is thus still technically in use as a burial ground. The Quaker congregation tries to ensure that it does not become too overgrown. With its rows of identical gravestones it is a typical Quaker graveyard of its period and needs to be maintained as a site of historical interest.