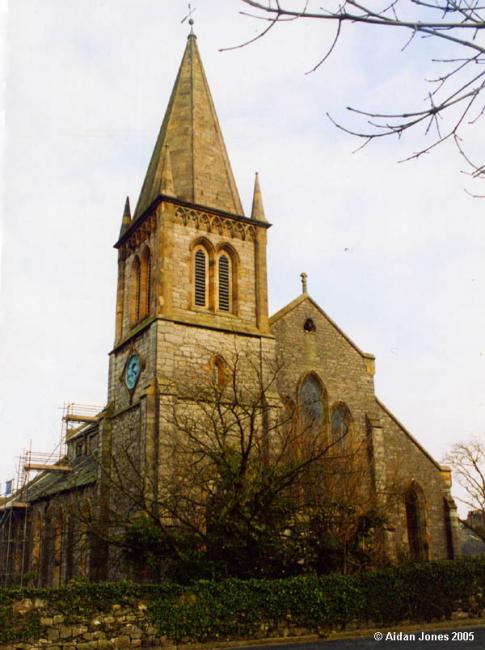 The church had a graveyard. A transcript of the monumental inscriptions was made in 1935-36 (including the St Mary's and Holy Trinity churchyards and Ulverston Congregational Church), was published in 1973 by the Cumberland & Westmorland Antiquarian and Archaeological Society.

Holy Trinity Church is an elegant yet substantial building in the early English style of architecture, with a spiral tower. It was erected in 1832 by public subscription, aided by a grant from the Parliamentary Commissioners. The altar-piece is a copy of Guido's Crucifixion, by Ghirardi, from the original in the church of Lorenzo di Luciana, in Rome, and was presented by the late Colonel Braddyll. The church was restored and enlarged in 1881, and will now accommodate 780 persons. The organ also was rebuilt, and greatly improved in size and tone, at a cost of £600. There is a beautiful stained glass window to the memory of the late Charles Kennedy, Esq., and two others were added in 1881, by Mr. Kennedy, of Stone Cross. The appearance of the interior of the church is now (June, 1882) being still further improved by the addition of a beautiful marble reredos from the studio of Messrs. Miles & Affleck, sculptors and monumental masons, Ulverston. The stipend, worth £180 net, is derived from fees and pew-rents, and the living is in the same patronage as St. Mary's. The benefice is styled a vicarage, and is now held by the Rev. L. R. Ayre, M.A., Cantab.

Holy Trinity was one of a series of new churches which were assisted by parliamentary funds, particularly in Lancashire, in order to meet the needs of expanding populations. They were often described as Commissioners churches. The church's origins have been outlined in the book Dear Mr Salvin (published by Helm Press of Natland, 1999). This book is based on correspondence between the clerk of works, William Brocklebank, and the London architect, Anthony Salvin.

After closure it had a varied existence, serving from 1977 as a sports hall which included a bar, squash courts and jacuzzi, before being sold in 1987 for eventual conversion into flats. However, much of the church exterior and many of the memorials in the graveyard have survived intact.