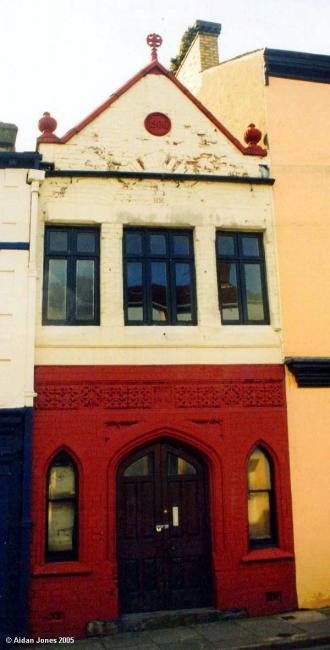 This building in Union Street, Ulverston, with a cross on top of the gable, has had a chequered history. In 1906 it was converted into a church for the Primitive Methodists, having previously been the Liberal Club. (It was reputedly at one stage a public baths.)

The Primitive Methodists had begun meeting in Ulverston in a mission room in Devonshire Road. Sometime around 1900, they had briefly used the former Catholic church in Fountain Street, known as the Oddfellows Hall. Their last noticed mention in the town was in the Furness Year Book of 1925. The Union Street building was subsequently taken over by an independent Church of Christ congregation, who were still using it at the final issue of the Furness & District Year Book in 1952. Eventually their members started to meet in another building, opposite the former Victoria Hall in Mill Street.

The Union Street building, shown in the photograph, has also been used for storage, although a proposal was recently put forward to turn it into a small theatre. The narrow entrance led into a foyer, beyond which was the main church area (i.e. situated behind the other houses which face onto the same street).