UPHOLLAND, a village, a township, a chapelry, and a sub-district, in Wigan parish and district, Lancashire. The village stands 1 mile NNW of Orrell r. station and 4 W of Wigan; and has a post-office under Wigan, and a cattle and horse fair on Easter Monday. The township contains also three hamlets, and comprises 4,452 acres. Real property, £16,912; of which £5,500 are in mines. Pop. in 1851, 3,359; in 1861, 3,463. Houses, 685. The property is much subdivided. The manor belongs to Lord Skelmersdale. Holland Grove is the seat of G. Bolderstone, Esq. A Benedictine priory was founded here, in 1319, by Sir R. de Holland; and has left some remains. Stone and slate are quarried, and fire bricks are made. The chapelry is more extensive than the township. Pop., 6,091. The living is a p. curacy in the diocese of Chester. Value, £300. Patron. the Rector of Wigan. The church was the chapel of the priory. A school at Pimbo-Lane is used as a chapel of ease. There are two Methodist chapels, an endowed grammar-school, two national schools, and charities £110. The sub-district contains 4 townships. Acres, 9,220. Pop., 6,982. Houses, 1,360.

Details about the census records, and indexes for Upholland.

The Register Office covering the Upholland area is West Lancashire.

You can see pictures of Upholland which are provided by:

"UPHOLLAND, an ancient chapelry, four miles and half west of Wigan, is rendered memorable by the great and ill-fated family who derived their descent and name herefrom, as well as for its monastery, which was created in 1318, through the means of Sir Robert de Holland, Knight. In 1546 the priory was sold to John Holcroft, Esq.; and at a subsequent period it became the property of Thos. Owen, Esq. from whom it passed by his daughter's marriage with Holt Leigh, Esq. down to his descendant, the present proprietor, Sir Robt. Holt Leigh, Bart. But little now remains of the ancient abbey except the church, which is used as a chapel of ease, and is in the patronage of the rector of Wigan, and in the incumbency of the Rev. John Bird. An increase in the population of this chapelry has taken place of about 1,000 persons within the last twenty years, which is to be attributed to the progress of manufacturers. By the last census the number of inhabitants was 3,042."

"UPHOLLAND, a township in the parish of Wigan, hundred of West Derby, county Lancaster, 4 miles S.W. of Wigan, its post town, and 1 mile N.W. of Orrell railway station. The village, which is situated on the Lancashire and Yorkshire railway, is well built and lighted with gas. In the vicinity are fire-brick works, slate and stone quarries, and collieries. The township includes the hamlets Roby Mill, Hall Green, and Tontine. Here are traces of a college, or Benedictine priory, founded by Sir Robert de Holland in 1319. The living is a perpetual curacy in the diocese of Chester, value £190, in the patronage of the Rector of Wigan. The church, dedicated to St. Thomas-a-Becket, once belonged to the priory. The charities produce about £110 per annum. There are two National schools and an endowed grammar school, at which a Sunday-school is held. The Wesleyans and Primitive Methodists have each a chapel. Holland Grove is the principal residence. Lord Skelmersdale is lord of the manor. A cattle and horse fair is held on Easter Monday."

"TONTINE, a village in the parish of Wigan, and the township of Upholland, county Lancaster, 4 miles S.W. of Wigan."

"ROBY MILL, a hamlet in the parish of Wigan, and township of Upholland, county Lancaster, 4 miles S.W. of Wigan."

"HOLLAND, a village in the township of Upholland, and parish of Wigan, county Lancaster, 4 miles W. of Wigan."

"HALL-GREEN, a village in the township of Upholland, parish of Wigan, county Lancaster, 4 miles W. of Wigan. It is situated near the Lancashire and Yorkshire railway."

In 1835 Upholland was a township in the parish of Wigan.

You can see the administrative areas in which Upholland has been placed at times in the past. Select one to see a link to a map of that particular area. 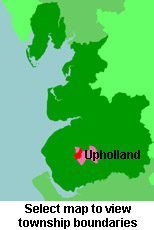 View maps of Upholland and places within its boundaries.