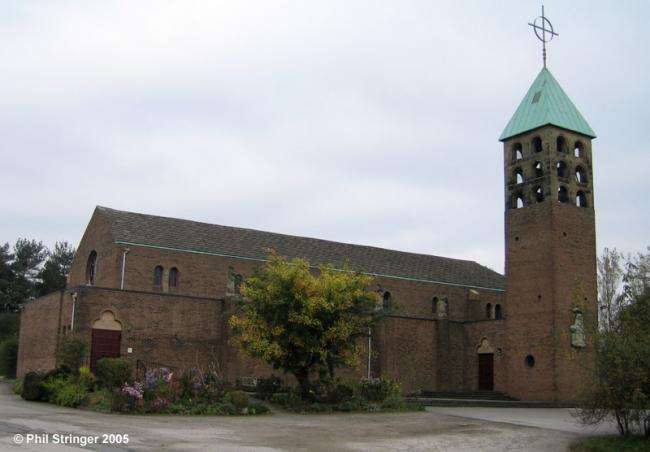 There is no graveyard at the church, but it does have one at Roby Mill, half a mile to the north.

In 1875 Fr Doon, the Parish Priest, could not provide a church for the people he loved in Roby Mill, so he built a school which he dedicated to "All Hallows", after the Dublin College he attended. In 1917 the Carmelite Convent was built and became a Mass centre served by priests from St Joseph`s College, (a school and seminary for the training of new priests). All Hallows School at Roby Mill was opened in the late 1800`s to serve the Catholic community of Roby Mill and Upholland. Due to the war, St Teresa`s church was not built until 1955 in College Road. In the 1970s a new primary school was built on the same site as the church and All Hallows school was closed.

In 1940 the parish of St Teresa`s was founded and the foundation stone was laid in Roby Mill, where the cemetary is today. The school was designated as the parish church until the new church was built, but due to the war, this was not possible until 1955 when it was constructed on the present site in College Road.

The parish still incorporates the Carmelite Convent in Roby Mill.