Details about the census records, and indexes for Urswick.

The Register Office covering the Urswick area is Ulverston.

You can see pictures of Urswick which are provided by:

"URSWICK, a parish in the hundred of Lonsdale North of the Sands, county Lancaster, 3 miles S.W. of Ulverston, its post town, and the same distance from Dalton. The parish is of large extent, and is divided into four townships-Much Urswick, Little Urswick, Bardsea, and Adgarley with Stainton. The village consists of the two hamlets of Great and Little Urswick. In the vicinity are traces of camps and forts, near which several Roman coins and a brass tripod were discovered. The living is a vicarage in the diocese of Carlisle, value £250, in the patronage of the landowners. The church has been recently restored. There is also a district church at Bardsea, the living of which is a perpetual curacy, value £100. The parochial charities produce about £38 per annum, of which £15 go to Marshall's free grammar school."

"STAINTON, a township in the parish of Urswick, hundred of Lonsdale North of the Sands, county Lancaster, 2 miles S.E. of Dalton-in-Furness."

"BARDSEA, a chapelry and township in the parish of Urswick, hundred of Lonsdale, in the county palatine of Lancaster, 5 miles to the E. of Dalton. The living is a perpetual curacy in the diocese of Carlisle, value £100, in the patronage of the Rev. T. E. Petty. It has a school, with an endowment of £8 a year, founded in 1781. The chief residence is Bardsea Hall."

"ADGARLEY, a township in the parish of Urswick, hundred of Lonsdale, in the county palatine of Lancaster, 4 miles to the S.W. of Ulverston. It is situated near the coast of Morecombe Bay."

You can see the administrative areas in which Urswick has been placed at times in the past. Select one to see a link to a map of that particular area. 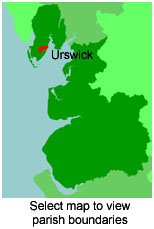 View maps of Urswick and places within its boundaries.