WALTON-LE-DALE, a village, a township, a chapelry, and a sub-district, in Blackburn parish and Preston district, Lancashire. The village stands on the river Ribble, 2 miles SE of Preston r. station; and has a post-office under Preston. The township includes Bamber-Bridge and Higher Walton villages and three hamlets; and comprises 4,630 acres. Real property, £22,358; of which £72 are in fisheries. Pop. in 1851, 6,855; in 1861, 7,383. Houses, 1,387. The property is much subdivided. W. Lodge, W. Hall, Darwen Bank, Darwen Cottage, Cooper Hill, Prospect Hill, Lostock Hall, and Highwood are chief residences. There are five cotton-mils, a print-work, an iron-foundry, and a corn mill; and market gardening is considerable. The chapelry formerly included all the township, but now excludes Bamber-Bridge and Higher Walton. Pop., 3,283. The living is a vicarage in the diocese of Manchester. Value, £300. Patron, the Vicar of Blackburn. The church was rebuilt about 1350, and partially restored in 1794, 1816, and 1861. There are a Roman Catholic chapel, a national school, and charities £78. The sub-district contains three townships. Acres, 9,400. Pop., 8,654. Houses, 1,634.

Details about the census records, and indexes for Walton le Dale.

The Register Office covering the Walton-le-Dale area is Preston and South Ribble.

You can see pictures of Walton-le-Dale which are provided by:

"BAMBER BRIDGE, a chapelry in the parish and hundred of Blackburn, in the county palatine of Lancaster, 3 miles from Preston, its post town. It is a station on the Lancashire and Yorkshire railway. The living is a perpetual curacy, of the value of £150, attached to the vicarage of Blackburn, in the diocese of Manchester, and in the patronage of the vicar."

"WALTON LE DALE, a township in the parish of Blackburn, lower division of Blackburn hundred, county Lancaster, 1½ mile S.E. of Preston, its post town, and 7 miles from Chorley. This township comprises a tract of elevated land overlooking the valleys of the Derwent and Ribble, and contains the hamlets of Brownedge, Cuerdon Green, Bamber Bridge, and Moon's Mill. The population in 1861 amounted to 7,383. The inhabitants are chiefly employed in the cotton mills and print works. Market gardening is carried on. The soil is fertile. The banks of the rivers are steep and clothed with wood. The living is a perpetual curacy in the diocese of Manchester, value £156, in the patronage of the Vicar of Blackburn. The church, dedicated to St. Leonard, was partly rebuilt in 1794. The parochial charities produce about £78 per annum, of which £16 go to a school. There are National schools for both sexes, a Sunday-school, and a workhouse. Sir H. B. Hoghton, Bart., is lord of the manor. This place was the scene of a battle fought 17th August, 1648, between Cromwell and the Duke of Hamilton. Here, in 1715, General, or Parson Wood and his congregation defended the passage of the Ribble against Scottish rebels. In 1701 the Duke of Norfolk, the Earl of Derwentwater, and other leaders of the Jacobites, incorporated themselves by the style of the "mayor and corporation of the ancient borough of Walton."

"LOSTOCK-HALL, a hamlet in the parish of Preston, hundred of Amounderness, county Lancaster, 4 miles from Preston. It is a station on the W. section of the Lancashire and Yorkshire railway."

BAMBER BRIDGE, a village and a chapelry in Blackburn parish, Lancashire The village stands adjacent to the East Lancashire railway, 3 miles SE by S of Preston; and has a post office under Preston, and a r. station. The chapelry was constituted in 1832. Rated property, £6,231. Pop., 2,182. Houses, 408. There are two large cotton factories. The living is a p. curacy in the diocese of Manchester. Value, £150.* Patron, the Vicar of Blackburn. The church was built in 1836. There are a Wesleyan chapel and a national school.

In 1835 Walton-le-Dale was a chapelry and township in the parish of Blackburn.

You can see the administrative areas in which Walton-le-Dale has been placed at times in the past. Select one to see a link to a map of that particular area. 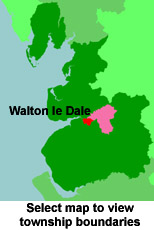 View maps of Walton-le-Dale and places within its boundaries.