Details about the census records, and indexes for Walton on the Hill.

The Register Office covering the Walton on the Hill area is Liverpool.

You can see pictures of Walton-on-the-Hill which are provided by:

"WALTON-ON-THE-HILL, a parish in the hundred of West Derby, county Lancaster, 3 miles N.E. of Liverpool. It is a junction station on the Lancashire and Yorkshire railway. This parish, comprising 24,650 acres, includes the townships of Aintree, Bootle, Everton, Edgehill, Fazerkerly, Formby, Kirkby, Kirkdale, with its sessions house, Toxteth Park, West Derby, Stanley, and Simonswood, already mentioned under their several headings. In consequence of its proximity to the river Mersey and the Leeds canal, this place has recently vastly increased in population, forming an extensive suburban district to Liverpool, within which borough it is partly included."

"STANLEY, a hamlet in the district parish of St. Anne's, borough of Liverpool, county Lancaster, 2 miles E. of Liverpool. It contains the cattle market."

You can see the administrative areas in which Walton-on-the-Hill has been placed at times in the past. Select one to see a link to a map of that particular area. 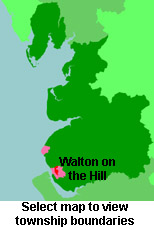 View maps of Walton-on-the-Hill and places within its boundaries.