WAVERTREE, a village, a township, two chapelries, and a sub-district, in Childwall parish and West Derby district, Lancashire. The village stands 1½ mile SE of Edgehill r. station, and 3 ESE of Liverpool; has been much improved under a local board of health; is a place of resort for invalids; and has a post-office under Liverpool, a police station, public baths, and a reading room. The township comprises 1,796 acres. Real property, £36,743; of which £66 are in quarries. Pop. in 1851, 4,011; in 1861, 5,392. Houses, 910. The manor belongs to the Marquis of Salisbury. There are numerous good residences, two churches, a free church of 1869, two dissenting chapels, a Roman Catholic chapel, two national schools, two large breweries, and an extensive ropery. The two chapelries are Holy Trinity and St. Mary; and the former is a p. curacy, the latter a rectory, in the diocese of Chester. Value of each, £300. Patron of the former, the Vicar of Childwall; of the latter, the Bishop of Chester. The sub-district contains 4 townships. Acres, 7,448. Pop. in 1851, 7,415; in 1861, 10,845. Houses, 1,792.

Details about the census records, and indexes for Wavertree.

The Register Office covering the Wavertree area is Liverpool.

You can see pictures of Wavertree which are provided by:

"WAVERTREE, a township in the parish of Childwall, hundred of West Derby, county Lancaster, 3 miles S.E. of Liverpool, its post town, and 1½ mile from Edgehill railway station. The village is situated on the Grand Junction canal. There are rope works and an extensive brewery. In the vicinity is an ancient well with a Latin inscription, bearing date 1414. The soil is loamy and sandy, with a subsoil of red sandstone and marl. The living is a perpetual curacy in the diocese of Chester, value £117, in the patronage of the Vicar of Childwall. The church is dedicated to the Holy Trinity. There is also St. Mary's church, erected in 1853. There are National schools for both sexes, including infants, and a Sunday-school. The Independents, Wesleyans, and Roman Catholics have each a chapel. The Marquis of Salisbury is lord of the manor."

In 1835 Wavertree was a township in the parish of Childwall.

You can see the administrative areas in which Wavertree has been placed at times in the past. Select one to see a link to a map of that particular area. 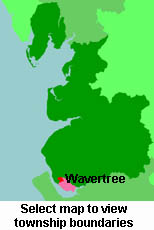 View maps of Wavertree and places within its boundaries.