WHALLEY, a village, a township, and a sub-district, in Clitheroe district, and a parish partly also in Blackburn, Haslingden, and Burnley districts, chiefly in Lancashire, but partly also in W. R. Yorkshire. The village stands on the river Calder, and on the Clitheroe railway, 3¾ miles S by W of Clitheroe; is a polling place; and has a post-office under Blackburn, a r. station with telegraph and a hotel. The township comprises 1,890 acres. Real property, £4,107. Pop. in 1851, 945; in 1861, 806. Houses, 163. The decrease of pop. arose from discontinuance of employment in print-works. The manor belongs to J. Taylor, Esq. Moreton Hall is the seat of J. Taylor, Esq., and Clerk Hill, of the Whalleys. A Cistertian abbey was founded here in 1296; was purchased, at the dissolution, by the Asshetons and the Braddylls; and has left splendid ruins in early, decorated, and later English architecture. The sub-district contains four townships of W. parish and one of Mitton. Acres, 9,000. Pop., 2,963. Houses, 605. The parish contains forty-eight townships in Lancashire and one in Yorkshire; and is ecclesiastically cut into the sections of Whalley-St. Mary, Accrington, A.-Christchurch, A.-St. John, Altham, Bacup, B.-Christchurch, B.-St. Saviour, Briercliffe, Burnley, B.-St. James, B.-St. Paul, B. -St. Andrew, Chatburn, Church-Kirk, C.-K.-St. Paul, Clayton-le-Moors, Clitheroe, C.-St. James, Colne, C.-Christchurch, C.-Barrowford, Downham, Fence-in-Pendle, Goodshaw, Habergham-Eaves, H.-All Saints, Haslingden, Heyhouses, Holme, Lumb, Great Marsden, Little Marsden, Newchurch-in-Pendle, Newchurch-in-Rossendale, Tunstead, Oswaldtwistle, Padiham, Rawtenstall, Trawden, Whitewell, and Worsthorne. Acres, 105,249. Pop. in 1851, 134,196; in 1861, 167,456. Houses, 32,094. The living of W.-St. Mary is a vicarage in the diocese of Manchester. Value, £310. Patrons, Hulme's Trustees, The church is ancient, and was repaired in 1855. Three ancient crosses are in the churchyard. There are a Wesleyan chapel, an endowed grammar-school with £51 a year and with a share of scholarships at Oxford, a national school, and charities £63. The other livings are noticed in their own several places.

Details about the census records, and indexes for Whalley.

The Register Office covering the Whalley area is Ribble Valley.

You can see pictures of Whalley which are provided by:

You can see the administrative areas in which Whalley has been placed at times in the past. Select one to see a link to a map of that particular area. 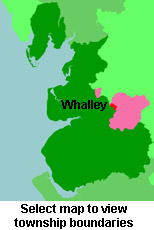 View maps of Whalley and places within its boundaries.