WHITTLE-LE-WOODS, a village, a township, and a chapelry, in Leyland parish, Lancashire. The village stands 2 miles E by S of Leyland r. station, and 6 SSE of Preston; is a scattered place; and has a postal pillar-box under Preston, and a large brewery. The township comprises 1,357 acres. Real property, £6,576; of which £80 are in quarries. Pop. in 1851, 2,310; in 1861, 2,151. Houses, 443. The decrease of pop. was caused by the stoppage of a manufactory. The property is sub-divided. Shaw Hall is the seat of T. B. Crosse, Esq. Medicinal springs were discovered in 1845; they arise from coal-borings, at a depth of 265 feet; they are much frequented by invalids and pleasure parties; and they gave rise to the erection of baths, a public hall, and a spacious hotel. The chapelry was constituted in 1830. Pop., 2,856. Houses, 587. The living is a vicarage in the diocese of Manchester. Value, £150.* Patron, the Vicar of Leyland. The church was built in 1823.

Details about the census records, and indexes for Whittle le Woods.

You can see pictures of Whittle-le-Woods which are provided by:

"HILL SOUTH, a hamlet in the hundred of Leyland, county Lancaster, 2 miles from Chorley. It is situated near the river Yarrow and the Leeds canal."

"WHITTLE-LE-WOODS, a township and chapelry in the parish and hundred of Leyland, county Lancaster, 2 miles N. of Chorley, on the Leeds canal. There are quarries of millstone and traces of lead, but the mine is no longer in operation."

In 1835 Whittle le Woods was a township in the parish of Leyland.

You can see the administrative areas in which Whittle-le-Woods has been placed at times in the past. Select one to see a link to a map of that particular area. 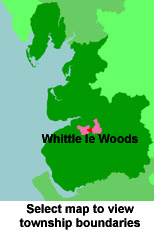 View maps of Whittle-le-Woods and places within its boundaries.