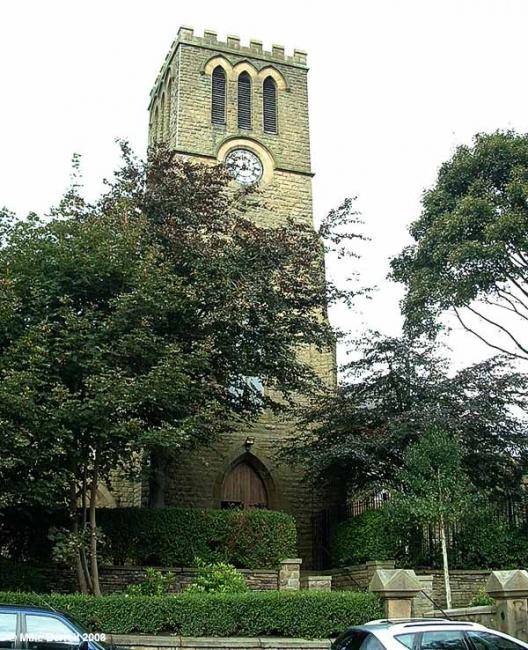 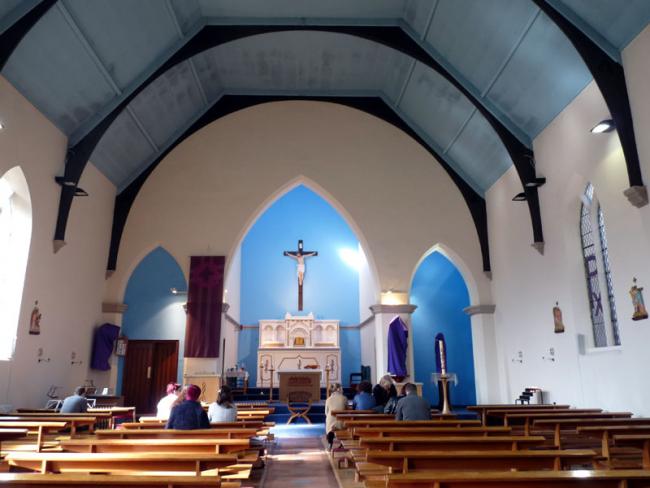 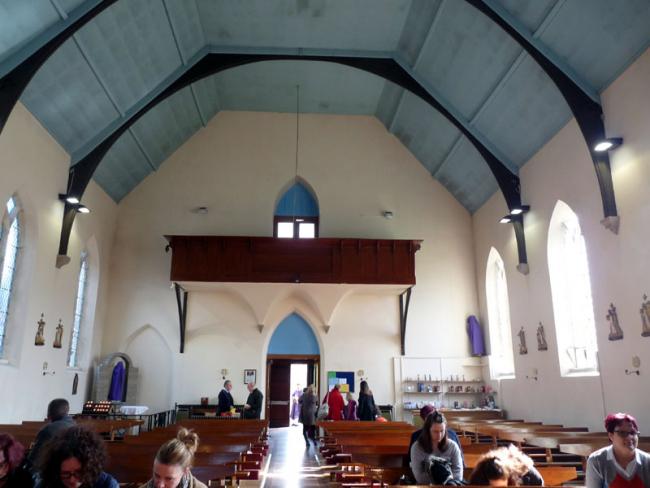 About the year 1856 there were working in the Whitworth Vale Mills and Quarries a moderate number of poor Irish emigrants, many of whom on Sundays walked to Rochdale to attend Mass at St. John's Catholic Chapel. An upper room of the "Hare and Hounds" Hotel, Whitworth, was eventually rented, and a priest from St. John's Chapel said Mass there every Sunday. On October 10, 1860, Dr. Turner, first Bishop of Salford, appointed the Rev. John Milward to the charge of the Whitworth New Mission. The room in the hotel was soon found insufficient to accommodate the increasing congregation, and the new pastor next rented a room over the then Co-operative Store premises, No. 267, Market Street, Whitworth. The congregation still becoming more numerous, in 1862 two cottages were rented (Nos. 305 and 307, Market Street), one serving as a presbytery and the other as a school, and at the rear of these a wooden chapel was erected. The Catholic popula­tion still augmenting, it was found necessary to provide larger premises in which to conduct their services and a room in Messrs. Smithson Brothers' Mill, in Market Street, Facit, was rented. Fr. Milward in 1867, seeing that the building of a chapel was inevitable, took on lease a plot of land in St. John's Street, Whitworth, and decided to build, from his own designs, a stone church and presbytery. In removing the soil for the foundation on June 27, 1868, at a depth of two feet, an urn of most primitive construction was found containing human bones.

The construction of the chapel had only proceeded for a short time when Father Milward's funds became low, notwithstanding that he had taken every precaution to keep down unnecessary expense. From the first he laboured himself as a common workman: lifed stones, carried mortar, acted as a carter in charge of his horse when the stone was being conveyed from his own quarry in the neighbourhood. When he had scarcely any money to pay the workmen and other necessary expenses, one of his horses was raffled to raise the sorely needed money. The winner took com­passion upon the zealous and careworn pastor, and gave the animal back to continue its share in the noble work. The horse was raffled several times, but was always returned to its master. Finan­cial difficulties increasing, one Sunday after service, the door of the place of worship was locked by his orders, and then he ex­plained to the congregation the lamentable state of his affairs, and again sought aid from the poor people who had all along been contributing their pence and silver coin. Fifty pounds on that occasion was promised.

The Chapel, but not its tower, and the house were at last finished, and on October 10, 1869, Bishop Turner of Salford conducted the opening ceremony, the Rev. C. J. Gadd, of Salford, preaching the sermon. In 1871, Father Milward leased a plot of land, adjoining the chapel, on which to build a school. In 1872 this noble and unselfish-minded priest left Whitworth, as his health was in a very delicate state. He only survived a few years.

The Rev. Charles Wood was the next priest stationed at Whit­worth, and he collected money for the erection of a school. The Rev. Adrian Egglesmere succeeded Father Wood in August 1875. He was a native of Holland, had served on the mission in the Uidted States of America, and came at the invitation of Bishop Vaughan to the Salford Diocese. During the eighteen years of his rectorship of the mission he built and equipped the new school, completed the tower of the church, and placed in it three fine bells and a large chiming clock. In 1893, Fr. Egglesmere retired, and the Rev. John Hogan was the priest in charge for a short time, followed by the Rev. Thomas Durnan. On October 9, 1893, the Rev. Robert Smith was appointed Rector, and he effected many Improvements in the school. In June 1894, the Rev. John Bramer succeeded Father Smith, and remained in charge to the end of the year. His successor was the Rev. Anthony Vanderbeek. During his charge the church was beautified and a larger organ was in­stalled. This zealous priest had to reorganise the sodalities of the church, and was highly esteemed by all classes in the district. His successor was the Rev. Thomas Dillon, who received his appoint­ment in March 1900.

Owing to a severe attack of illness, this popular young priest was ordered by his medical adviser to take a lengthened period of rest. He was succeeded in February 1905, by the Rev. James R. Youlden. The next priest to serve the Mission was the Rev. Godric Kean. His appointment dates from December 5, 1908. Prior to his taking charge, provision for a new school had begun. On August 14, 1909, the new school was solemnly blessed by the Right Rev. L. C. Casartelli. On May 8, 1911, Father Kean was transferred to St. Mary's, Oldham, and passed on the charge to his successor, the Rev. Michael Buckley. During his charge many improvements were effected. These include a new vestry, two side chapels with memorial windows, two new altars, made and presented by Mr. W. W. Reed, late head-teacher of St. Anselm's School. Fr. Buckley had a heavy burden to bear during the Great War, when practically all his men of military age, numbering 126, including Mr. Reed, joined the colours. This number represents one fifth of his entire congregation, and of these 22 made the supreme sacrifice, or one fifth of those who joined up. Their names are memorialised on a handsome brass tablet in the Memorial Chapel.

During the time of office of Fr. Louis Tighe, a new Parish Hall and school extensions were built and opened in 1936. In addition three acres of land were bought for playing fields.