WIDNES, a town, a township, and a chapelry, in Prescot parish, Lancashire. The town stands on the river Mersey, at the intersection of the Warrington and Liverpool and the Ormskirk and Runcorn railways, adjacent to the new great railway viaduct over the Mersey at Runcorn Gap, 11 miles ESE of Liverpool; rose from a pop. of less than 2,000 in 1851 to a pop. of nearly 13,000 in 1869; began, in 1847, to be a seat of extensive chemical works; produces annually about 32,000 tons of the several products of soda; produces also large quantities of nitrogenised bone manure; has likewise copper-smelting-works, iron-works, foundries, soap-works, grease-works, oil and paint-works, a limestone mill, and sailcloth manufactories; acquired, about 1864, well-constructed docks, with 12½ acres of water area and 3,348 yards of berthage; exports coal to the amount of about 10,000 tons a-week; and has a post-office under Warrington, a r. station with telegraph, waterworks constructed in 1869 at a cost of £40,000, a court-house, a police station, a church of 1856, an Independent chapel, two Welsh chapels, a handsome Wesleyan chapel of 1864, another Methodist chapel, an ornate Roman Catholic chapel of 1866, and a national school. The township includes Appleton and Farnworth villages and several hamlets; and comprises 3,000 acres of land, and 330 of water. Rated property in 1841, £6,236: in 1864, £41,601. Pop. in 1851, 3,217: in 1869, 6,905. Houses, 1,257. The manor belongs to Mrs. Hutchinson. The chapelry includes only part of the township, and was constituted in 1859. Pop. in 1869, 7,072. Houses, 1,320. The living is a vicarage in the diocese of Chester. Value, £160.* Patron, W. Wright, Esq.

Details about the census records, and indexes for Widnes.

The Register Office covering the Widnes area is Halton.

You can see pictures of Widnes which are provided by:

"WIDNES, a township and town in the parish of Prescot, hundred of West Derby, county Lancaster, 5 miles S.E. of Prescot, 6 from Warrington, and 13 N.W. of Liverpool. It has stations on the Manchester and Liverpool and St. Helen's section of the London and North-Western, and Manchester, Sheffield, and Lincolnshire railways. It is situated opposite Runcorn on the navigable river Mersey, here joined by the Sankey canal, and on the Liverpool and St. Helen's, and Warrington and Garston railways. The township includes the town of Widnes, with a population, in 1861, of 4,803, the ecclesiastical district of St. Mary's, with 3,872, the villages of Appleton, Fearnworth, Widnes Docks, and Wood-End, and the hamlets of Hanging Birch, Lane End, Lunt's Heath, and Upton. There are extensive chemical, soap, alkali, and copper smelting works, oil mills, boat-building yards, factories for watch and clock movements, and brickfields. The living is a perpetual curacy in the diocese of Chester. The church of St. Mary was erected in 1856. The Wesleyans have a chapel. There are National, British, and Wesleyan schools. The Marquis of Cholmondeley is lord of the manor."

"FARNWORTH, a chapelry in the parish of Prescot, hundred of West Derby, county palatine Lancaster, 4 miles S.E. of Prescot, and 82 N.W. of Warrington, its post town. It includes the townships of Bold, Cronton, Ditton, and Widness. The St. Helens and Lancashire and Yorkshire railway has a station here. Sailcloth, canvas, and watch movements are manufactured in this neighbourhood. The living is a perpetual curacy in the diocese of Chester, value £172, in the gift of the vicar of the parish. The church is an ancient structure, with handsome E. window, dedicated to St. Luke. The grammar school founded by Bishop Smith in the reign of Henry VIII. has an endowment of £50 per annum. In the vicinity are a number of respectable residences."

"LUNT'S HEATH, a hamlet in the parish of Prescot, and township of Widnes, county palatine of Lancaster, 5 miles S.E. of Prescot. It is situated in the vicinity of the river Mersey."

"LANE ENDS, a hamlet in the parish of Prescot, and township of Widnes, county Lancaster, 5 miles S.E. of Prescot."

"HANGING BIRCH, a hamlet in the parish of Prescot, and township of Widnes, county Lancaster, 4 miles S.E. of Prescot."

"FARNWORTH, a village in the township of Widness, parish of Prescot, hundred of West Derby, county palatine Lancaster,"

"APPLETON, a village in the township of Widness, in the parish of Prescot, hundred of West Derby, in the county palatine of Lancaster, 5 miles to the S.E. of Prescot. The river Mersey flows to the south of the village, which is a station on the St. Helen's branch of the Lancashire and Yorkshire railway. The Wesleyan Methodists have a chapel here."

"FARNWORTH, a village, a chapelry, and a sub-district, in Prescot parish and district, Lancashire. The village stands near the St. Helen's and Runcorn Gap railway, 2¾ miles N by E of Runcorn Gap, and 4¾ SE of Prescot; and has a station on the railway, and a post office under Warrington. The chapelry is partly in Warrington district; and was constituted in 1859. Pop. of the Warrington d. part, 1,539; of the whole, 6,447. Houses in the W. d. part, 283; in the whole, 1,191. The living is a vicarage in the diocese of Chester. Value, £300.* Patron, the Vicar of Prescot. The church is ancient, and was recently restored. Another church, at Widnes Dock, was built in 1858, and designed with a view to enlargement. There is a free grammar-school. William Smith, the founder of Brasenose college, Oxford, and bishop of Lincoln, was born in this chapelry, at Peel House. The sub-district comprises the townships of Widnes, Cronton, Ditton, and Bold. Acres, 10,861. Pop., 8,879. Houses, 1,599."

In 1835 Widnes was a township in the parish of Prescot.

You can see the administrative areas in which Widnes has been placed at times in the past. Select one to see a link to a map of that particular area. 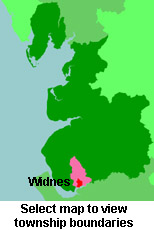 View maps of Widnes and places within its boundaries.