WIGAN, a town, a township, a parish, and a district, in Lancashire. The town stands on the river Douglas, at a convergence of railways, and on the Leeds and Liverpool canal, 15½ miles S by E of Preston; is described to have been, in the time of Henry VIII., "as big as Warrington, but better built;" was the scene, in 1651, of the Earl of Derby's defeat by Lilburne; was visited, in 1745, in his march southward, by Prince Charles Stuart; numbers among its natives Bishop Woolton, who died in 1573, and Dr. Leland, the author of "Deistical Writers;" was chartered by Henry III.; sent members to parliament twice in the time of Edward I., and has sent two since the time of Edward VI.; is governed, under the new act, by a mayor, 10 aldermen, and 30 councillors; is a seat of sessions and county courts, and a polling place; publishes two weekly newspapers; is famous for a great and rich coalfield around it; exports vast quantities of coal and other minerals and merchandise, both by railway and by canal; carries on cotton-spinning in numerous factories, some of them among the largest in England; carries on also the manufacture of calicoes, checks, stripes, ginghams, table-cloths, and other cotton fabrics; has likewise some extensive linen-works, several iron-forges, iron and brass foundries, and manufactories of spades, picks, and edge-tools; occupies several acclivities; consists partly of old, irregular, narrow, crooked streets, and partly of new and well-aligned streets, with many good houses; comprises a main-street nearly 1½ mile long, with streets diverging from it to the right and to the left; and has a head post-office,? two r. stations with telegraph; three banking offices, five chief inns, several bridges, a town hall of 1720, a moot-hall, a public-hall, handsome public offices of 1864, a corn exchange, a theatre, a monumental pillar to Sir T. Tyldesley, a fine ancient parochial church restored in 1856, a handsome church of 1841 with tower and lofty spire, a beautiful church of 1864 with pinnacled tower, two other churches, three Independent chapels, three Baptist chapels, four Methodist chapels, two other dissenting chapels, three Roman Catholic chapels, a mechanics' institution and reading rooms, an endowed grammar-school with £229 a year, a national and blue-coat school, five other national schools, seven other public schools, an infirmary founded in 1869 and estimated to cost about £30,000, a dispensary, a workhouse of 1857 with capacity for 800 inmates, charities £1,199, markets on Mondays and Fridays, and fairs on Holy Thursday, 27 June, and 28 Oct. Acres, 2,161. Real property, in 1860, £107,134; of which £23,538 were in mines, £80 in quarries, and £1,200 in gasworks. Amount of property and income tax charged in 1863, £10,183. Corporation income, about £3,380. Electors in 1833, 423: in 1863, 845. Pop. in 1851, 31,941; in 1861, 37,658. Houses, 6,696. more ...

Details about the census records, and indexes for Wigan.

The Register Office covering the Wigan area is Wigan and Leigh.

You can see pictures of Wigan which are provided by:

"SCHOLES, a ward in the parish and borough of Wigan, hundred of West Derby, county Lancaster, adjoining Wigan, of which it is a suburb. It is situated on the eastern bank, and near the source of the river Douglas. Many of the inhabitants are engaged in the cotton mills, and some in the neighbouring collieries. The living is a curacy in the diocese of Chester, value £150, in the patronage of the Rector of Wigan. The church was erected in 1840 at an expense of £3,225, partly defrayed by the parliamentary commissioners."

You can see the administrative areas in which Wigan has been placed at times in the past. Select one to see a link to a map of that particular area. 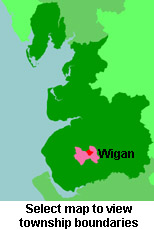 View maps of Wigan and places within its boundaries.

The Workhouse site has an interesting description of Wigan workhouse.