WINWICK, a township, a parish, and a sub-district, in Warrington district, Lancashire. The township lies 2 miles S by E of Newton r. station, and 2½ N of Warrington; bears the name of W.-with-Hulme; and has a post-office under Newton-le-Willows. Acres, 1,431. Real property, £3,579. Pop., 451. Houses, 87. The parish includes Houghton, Middleton, and Arbury township; and comprises 2,270 acres. Pop., 704. Houses, 132. The property is much subdivided. W. Hall is the seat of the Rev. F. G. Hopwood. The living is a rectory in the diocese of Chester. Value, not reported. Patron, the Earl of Derby. The church is chiefly ancient; was partly rebuilt in 1848, and extensively improved in 1858; and has a tower, with octagonal spire. There is an endowed grammar-school with £34 a year. The sub-district includes Croft-with-Southworth parish.

Details about the census records, and indexes for Winwick with Hulme.

The Register Office covering the Winwick area is Warrington.

You can see pictures of Winwick with Hulme which are provided by:

"WINWICK, a parish in the hundred of West Derby, county Lancaster, 3 miles N. of Warrington, 2 S. of Newton-in-Mackerfield, and 3 S.W. of the Kenyon railway station, on the Manchester and Liverpool, and Kenyon and Leigh railways. It was once a populous parish, comprising near 25,000 acres, with a population of over 20,000, but has been much reduced by the erection of Ashton-in-Mackerfield, Newton-in-Mackerfield, and Southworth-with-Croft, into distinct parishes, so that the population of the parish proper in 1861 was only 704, and that of the township of Winwick-with-Hulme 451. The village of Winwick is situated on the turnpike road midway between Warrington and Newton-in-Mackerfield, not far from the Sankey canal, and the London and North-Western railway. According to some antiquarians, it was the ancient Maserfeld, where Oswald, king of Northumbria, was slain in 612; and at a place called Redbank, between the village of Winwick and the town of Newton, the Scots were defeated, in 1648, by Oliver Cromwell. The living is a rectory in the deanery of Warrington, archdeaconry of Liverpool and bishopric of Chester. The church, dedicated to St. Oswald, is supposed to be coeval with the establishment of the Christian religion in the country. It has two private chapels and a new chancel, added in 1847. In the interior are an inscription to St. Oswald, two ancient brasses of Sir P. Legh, of Lyme, with effigies bearing date 1527, and one to Gerard Bryn of 1492, besides an antique font and four painted windows. There are a free Grammar school, founded by Gualter Legh in 1618, with an income from endowment of £34; a Sunday-school and church schools for both sexes, supported by the rector, the Rev. F. G. Hopwood, who is lord of the manor."

"HULME, a township in the parish of Winwick, county Lancaster, 3 miles N. of Warrington."

You can see the administrative areas in which Winwick with Hulme has been placed at times in the past. Select one to see a link to a map of that particular area. 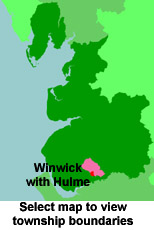 View maps of Winwick and places within its boundaries.