WITHINGTON, a township and a chapelry in Manchester parish, Lancashire. The township lies 4 miles S of Manchester r. station; has a post-office under Manchester; and includes Fallowfield, which also has a post-office under Manchester. Acres, 2,498. Real property, £16,747. Pop. in 1851, 1,492; in 1861, 2,712, of whom 771 were in Chorlton workhouse. Houses, 347. The manor belongs to Lord Egerton. There are numerous villas and other good residences. Chorlton workhouse here was built in 1855, at a cost of about £53,000. The Lancashire Independent College also is here, but has been noticed in our article on Hulme. The chapelry was constituted in 1854. Pop., 2,775. Houses, 359. The living is a rectory in the diocese of Manchester. Value, £362. Patrons, Trustees. The church was built in 1841. There are a Wesleyan chapel and a national school.

Details about the census records, and indexes for Withington.

The Register Office covering the Withington area is Manchester.

You can see pictures of Withington which are provided by:

"WITHINGTON, a township -in the parish of Manchester, county Lancaster, 4 miles S. of Manchester, of which it is a suburb. The ecclesiastical district of St. Paul in 1861 contained 2,775 inhabitants."

In 1835 Withington was a township in the parish of Manchester.

You can see the administrative areas in which Withington has been placed at times in the past. Select one to see a link to a map of that particular area. 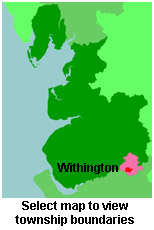 View maps of Withington and places within its boundaries.