WORSLEY, a village, a township, a chapelry, and a sub-district, in Eccles parish, Barton-upon-Irwell district, Lancashire. The village stands on the Bridgewater canal, and on the Manchester, Tyldesley, and Wigan railway, 6½ miles WNW of Manchester; and has a post-office under Manchester, a r. station, a modern court-house for petty sessions, a literary institution, and nine schools. The township includes four other villages or hamlets; contains W., Ellenbrook, and Swinton chapelries; carries on cotton manufacture, iron-working, brick-making, and extensive coal mining; and has three churches, a school-church, several dissenting chapels, the Manchester industrial schools, a national school, and charities £16. Acres, 6,240. Real property, £36,315; of which £5,200 are in mines, £23 in iron-works, and £48 in gasworks. Pop. in 1851, 10,189; in 1861, 11,875. Houses, 2,232. The manor was known, at the Norman conquest, as Workedesly; belonged then to Elias de Workedesly; came to the Duke of Bridgewater; and , with W. Hall, belongs now to the Earl of Ellesmere. The Hall was built in 1840-6, after designs by Blore; is in a florid variety of the Tudor style; was visited, by Queen Victoria and Prince Albert in 1851, by the Queen again, in 1857, by the Prince of Wales, in 1869; and commands an extensive view. A memorial column to the first Earl of Ellesmere crowns an adjacent height. A splendid system of tunnel navigation, connected with the Bridgewater canal, commences in the village; had the effect, when completed, of reducing the cost of conveying coals and other heavy goods 100 per cent.; and possesses great interest to geologists, for examining the strata which it traverses. W. chapelry was made ecclesiastically parochial in 1863. Pop., about 2,300. The living is a vicarage in the diocese of Manchester. Value, £250. Patron, the Earl of Ellesmere. The church is recent, and in the decorated English style; and has a lofty spire. There are three small dissenting chapels. The sub-district consists of W., and Clifton townships, and comprises 7,060 acres. Pop., 14,015. Houses, 2,597.

Details about the census records, and indexes for Worsley.

The Register Office covering the Worsley area is Salford.

You can see pictures of Worsley which are provided by:

"WALKDEN MOOR, an ecclesiastical district in the parish and borough of Manchester, county Lancaster, 5 miles N.W. of Manchester."

"ELLENBROOK, a township in the parish of Eccles, hundred of Salford, county palatine of Lancaster, 4 miles N.E. of Leigh. Manchester is its post town. The living is a perpetual curacy in the diocese of Manchester, value £137."

"WORSLEY, a township and village in the parish of Eccles, hundred of Salford, county Lancaster, 6 miles S. of Bolton, and 7 N.W. of Manchester, forming part of the borough of South Lancashire. It is a station on the Manchester and Wigan branch of the London and North-Western railway, and has water communication by means of the Bridgwater canal with all parts of the kingdom. Branching from the trunk canal are a series of underground canals and tunnels, some 180 feet below the surface, cut by Brindley, for the Duke of Buckingham, at a cost of £169,000, and communicating with the extensive collieries. This township includes the hamlets of Newtown, Little Houghton, Boothstown, and Ellenborough Chapel. The population in 1861 was 11,875, many being employed in the cotton mills. The soil is clayey, and the subsoil mostly moss. The manor at the time of the Conquest belonged to Elias de Workedesley, and in the 17th century came to the Dukes of Bridgwater, to whom it still belongs, though the greater bart of the land and the collieries are now the property of the Earl of Ellesmere, whose seat is Worsley Hall, built in 1806 by Blore in the Elizabethan style, and visited by the Queen in October, 1851. From the windows a view is obtained over seven counties, and in the interior are oak panelling, sculpture, and painting, including Landseer's "Return from Hawking." Adjoining the park are the remains of the old timbered seat of the Duke of Bridgwater, and Wardley Hall, said to have been built in the reign of Edward VI. The lying is a perpetual curacy in the diocese of Manchester, value £200. The church is dedicated to St. Mark. The Wesleyans and Independents have chapels, and there are National and Sunday schools. Worsley is the seat of a superintendent register, but is included in Salford New County-court district, and Barton-upon-Irwell Poor-law Union."

"NEWTOWN, a hamlet in the township of Worsley, parish of Eccles, county Lancaster, 6 miles N.W. of Manchester. It is situated near the Wigan canal and the line of the Liverpool railway."

ELLENBROOK, a chapelry, with a r. station, in Eccles parish, Lancashire; on the Manchester and Wigan railway, 2½ miles E of Tyldesley. The living is a p. curacy. Value, £137. Patron, the Earl of Ellesmere. The church is in the Norman style.

In 1835 Worsley was a township in the parish of Eccles.

You can see the administrative areas in which Worsley has been placed at times in the past. Select one to see a link to a map of that particular area. 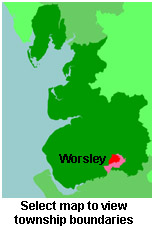