The Boston Library is part of the Lincolnshire Library system and is located in the Town Hall building. It is open six days each week most weeks and has a Local History and Family History section to assist you with your searches. It is about one block from St. Botolph's Church. The building has ramp access for the handicapped. The Library has free and fast Internet Access for all card-holders.

David HALLAM-JONES has a photograph of the Public Library, Boston on Geo-graph, taken in October, 2014.

There is a new footbridge over the River WItham that makes foor-traveller access to St. Botolph's and the Library even easier. David P. HOWARD has a photograph of the St. Botolph Footbrige on Geo-graph, taken in March, 2015.

Boston Guildhall is a beautiful medieval building, built in 1390 by the Guild of St Mary, which houses a museum added in 1929. They invite you to uncover Boston’s intriguing history, learn all about its links with America and Australia. The Guildhall is on South Street, just east of the River Witham.

These books may also help: 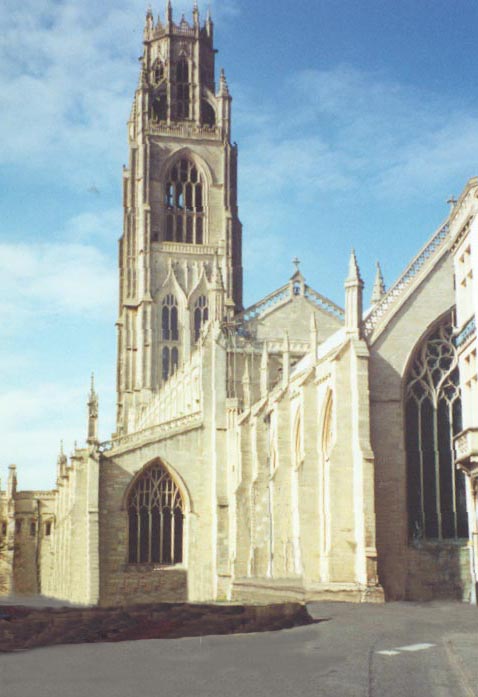 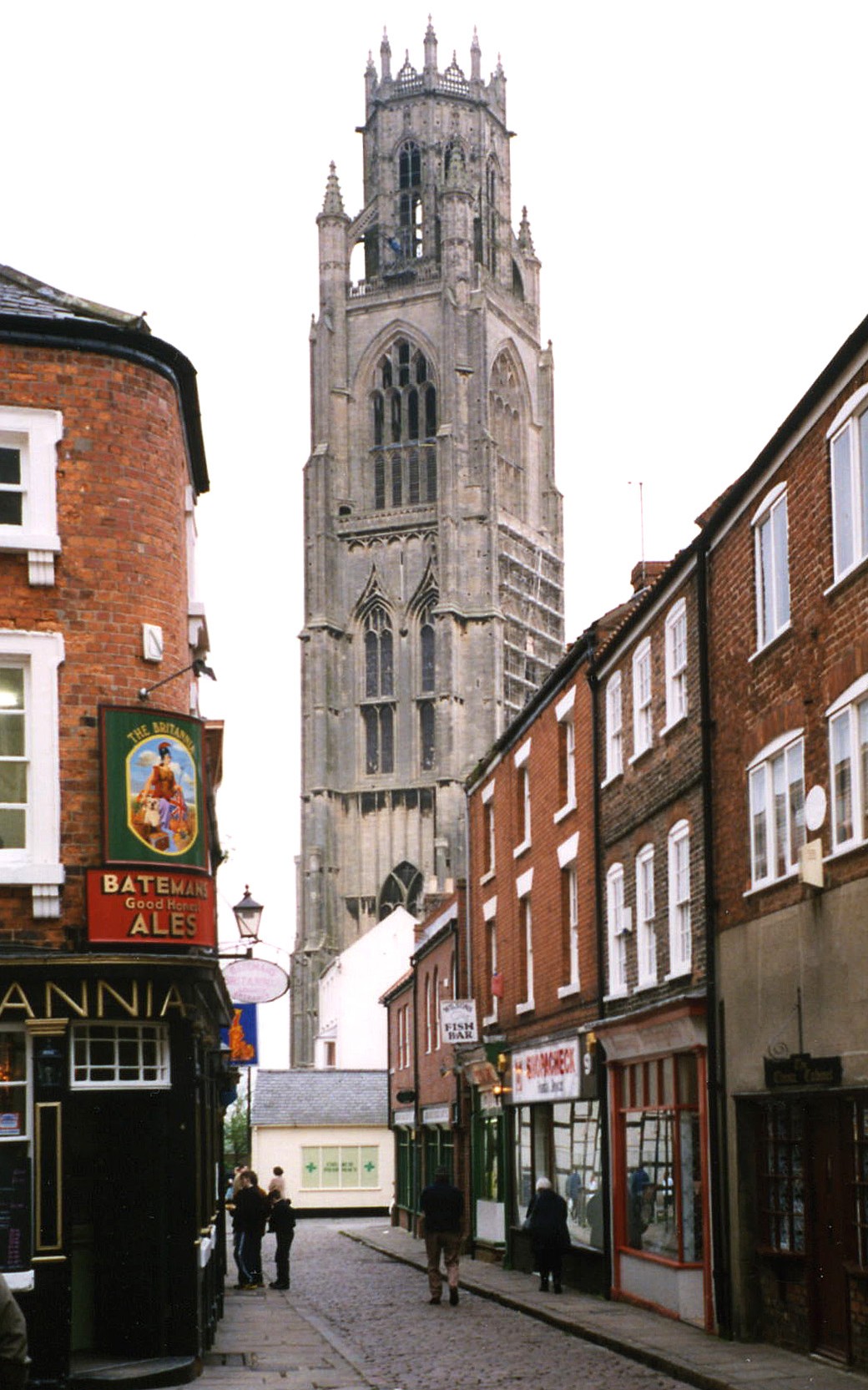 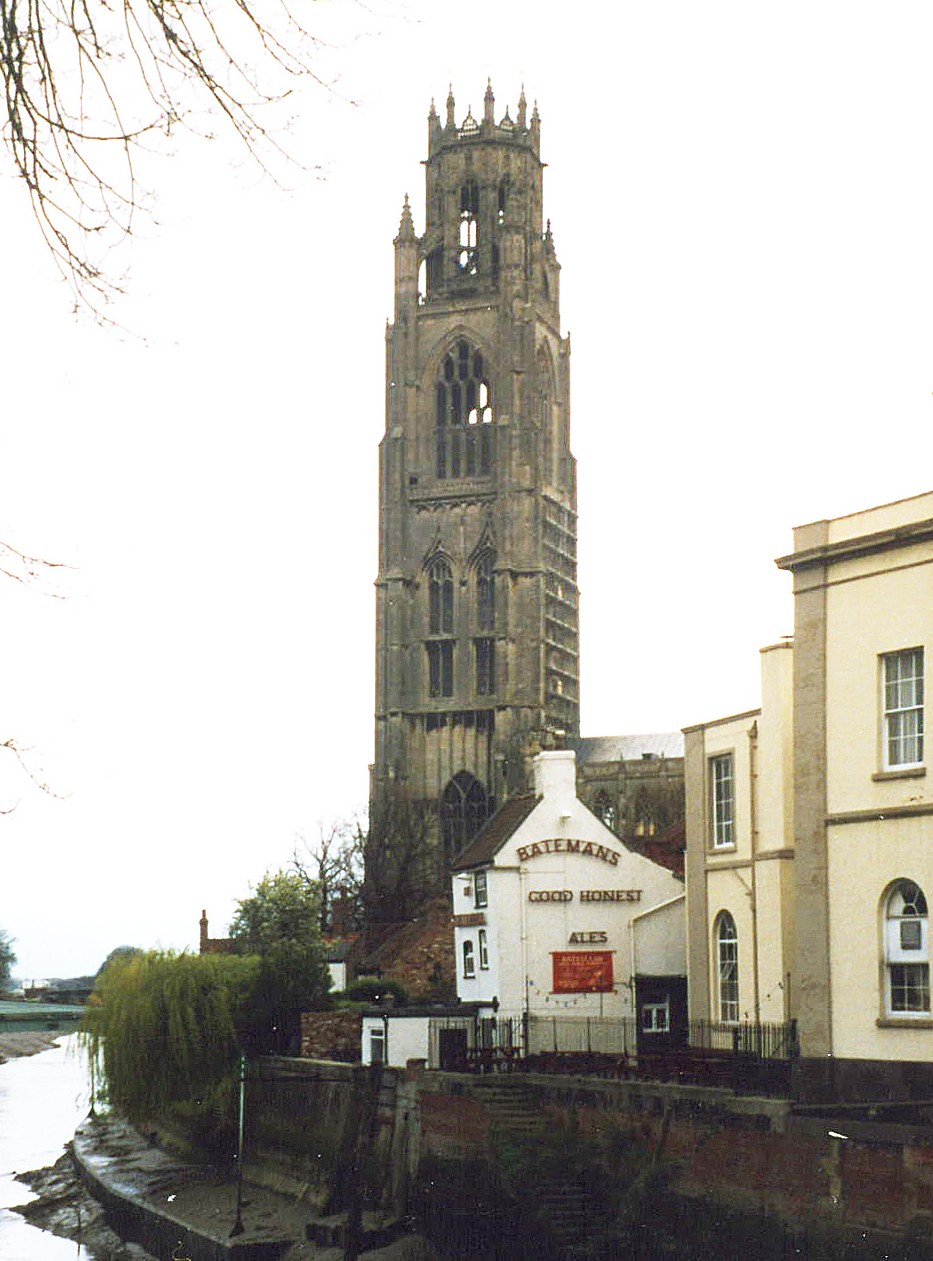 From 1552, Bostonians used to have their jail near the Stump. This is likely to be where the Scrooby Pilgrims were imprisoned in 1607.

Boston is both a parish and a town near the east coast of Lincolnshire. The River Witham turns south-east and runs through Boston to the sea at Black Buoy Sand. The parish of Boston is surrounded by Skirbeck parish on the east and south, with Wyberton and Brothertoft to the west and Langriville and a portion of Sibsey to the north. Boston parish comprises most of the old town of Boston. Due to the drainage of the Fens and population growth in the area, parish boundaries have been changed over the centuries. New parishes were added in the area in the late 1800's. In 1932, civil and parish boundaries were changed and are no longer the same for each jurisdiction, so no two maps will show the same boundaries.

The town of Boston lies near "The Wash", an inlet of the North Sea on Lincolnshire's southeast coast. The Wash is notorious for its sandbars and shallows.

Boston was a market town and sea port. The town is dominated by the 282-foot-high tower of St. Botolph's parish church (some sources say 272-foot-high). The tower (and not the church) is called "The Stump" by local fishermen who use it as a navigation beacon, but the term is sometimes used by others to include the church as well. If you are planning a visit:

You can see pictures of Boston which are provided by:

There have been many works on the Witham, from Roman times to the modern period. In an Atlas for Boston - Frank Molyneux and Neil Wright, p36 it is recorded that the area of Boston known as "Old River Bed" holds 74 acres. I believe this description resulted from the enclosure of land relating to the old course of the River Witham, which was substantially altered to improve navigations and drainage between Boston and Lincoln. The Witham Drainage Act was approved in 1761. The proud boastings of Boston's corporations before the opening of the Grand Sluice at Boston as part of the scheme drove one disappointed visitor of the opening ceremony to verse following the ceremony:

"Boston, Boston, Boston!
Thou has naught to boast on,
But a Grand Sluice, and a high steeple;
A proud, conceited, ignorant people
And a cost (sic) where souls are lost on."

You can see the administrative areas in which Boston has been placed at times in the past. Select one to see a link to a map of that particular area.

There is also this pamphlet series:

Caution: due to the drainage of the Fens and population growth in the area, parish boundaries have been changed. New parishes were added in the area in the late 1800's. In 1932, civil and parish boundaries were changed and are no longer the same for each jurisdiction, so no two maps will show the same boundaries.

As you left Boston in the old days, heading south towards Spalding, Peterborough and London, you would travel down High Street, which then became London Road. At this point there are houses along only one side of the road, as the river is immediately on the other side. London Road runs along the river for about a 1/3rd of a mile, when the river does a 90-degree left turn towards the Wash.

The road area, at the junction with what was originally Rowell Row and which since September 1936 is Wyberton Low Road, is called Newtons Corner. There used to be almhouses there, but they were demolished around 1960 - 1970. A baker's shop has been across the road from where the almhouses were for at least 50 years, and there also used to be a corn merchants a few doors along in the 1950s.

Boston flourished in the 1800s. The statistics below will include the officers and inmates in the Poor Law Workhouse:

Boston has an ancient tradition as a centre of learning:

Frank BONTOFT was a school teacher in Boston in the late 1870s, but it doesn't seem that he was particularly well-liked by his students. Apparently the children used to chant this little ditty which they wrote about him: [Rosemary Ash]