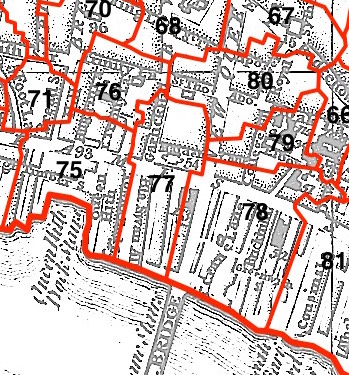 "ST. JAMES'S, Garlickhithe, the church of, is situated at the corner of Garlick-hill and Maiden-lane, Upper Thames-treet, and derives its name from being dedicated to St. James the Apostle, and its addition from its ancient vicinity to the Garlick market of the city. The earliest mention of this church is, that it was rebuilt by Richard de Rothin, sheriff, in 1326. The ancient church was destroyed by the great fire of 1666, the foundation of the present building was laid in 1676, and the church finished in 1682. It is built of stone, is seventy-five feet in length, forty-five feet in breadth, and forty feet in height to the ceiling. . . This church is a rectory, the patronage of which appears to have been in the abbot and convent of Westminster, till the suppression of their monastery by Henry VIII., when coming to the crown, it was granted by Queen Mary to the Bishop of London and his successors, in whom it still remains. It is in the city, diocese and archdeaconry of London, and in the patronage of the Bishop of that see. Its present rector is the Rev. Charles Goddard, D.D., Archdeacon and Prebendary of Lincoln, Chaplain in Ordinary to His Majesty, Vicar of Bexley, in Kent, and of Louth, in Lincolnshire, who was instituted by the Bishop of London in 1821." [James Elmes. A Topographical Dictionary of London and its Environs (1831) - transcribed by Brian Randell]

History of St James Garlickhythe, from the Church's website.

Online Parish Register Images and Indexes for St James Garlick-Hythe parish are provided by, or at various subscription sites via, the LDS FamilySearch wiki.

No non-Church of England denominations have been identified for St James Garlickhithe [LDS FamilySearch Wiki].

You can see pictures of St James Garlick-Hythe which are provided by:

The last will and testament of Robert Chichele from the Medieval English Towns website.

You can see the administrative areas in which St James Garlick-Hythe has been placed at times in the past. Select one to see a link to a map of that particular area.

Surnames from the 1881 census in the St James Garlick-hythe district.

Clerical career summaries for the parish of St James Garlick-Hythe, from the Clergy of the Church of England Database website.