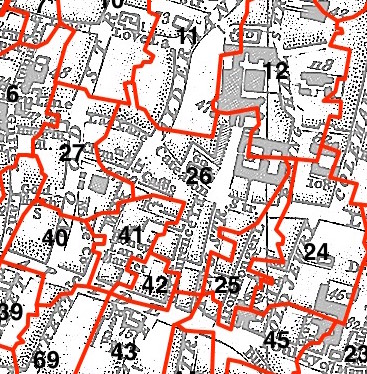 "ST. LAWRENCE, Jewry. The church of, is situated at the south-west corner of Guildhall-yard and Cateaton-street. It derives its name as being dedicated to St. Lawrence, a Spanish saint, who was broiled alive upon a gridiron, in the reign of the Emperor Valerian, and its addition from its situation near the Jewry. The ancient church on this site was a rectory, which being given by Henry de Wickenbroke to Baliol College, in 1294, the rectory ceased, and Richard, Bishop of London, converted it into a vicarage, and the patronage still continues with the Master and Scholars of that college. It was destroyed by the great fire of 166G, and was rebuilt by Sir Christopher Wren, at the expense of the parishioners, assisted by a very liberal benefaction by Sir John Langham. The parish of St. Mary, Magdalen, Milk-street, was united to it by an act of parliament, and the church was finished in 1676. . . . The advowson of this church is a vicarage, and that of its sister parish of St. Mary Magdalen, Milk-street, is a rectory, and the patronage is alternately with Baliol College and the Dean and Chapter of St. Paul's. It is in the city and archdeaconry of London, and the present incumbent is the Rev. Allatson Burgh, who was instituted by the Dean and Chapter, whose turn it was, in 1815." [James Elmes. A Topographical Dictionary of London and its Environs (1831) - transcribed by Brian Randell]

A History of the Church - provided on the St Lawrence Jewry website.

Online Parish Register Images and Indexes for St Lawrence Jewry parish are provided by, or at various subscription sites via, the LDS FamilySearch wiki.

You can see pictures of St Lawrence Jewry which are provided by:

You can see the administrative areas in which St Lawrence Jewry has been placed at times in the past. Select one to see a link to a map of that particular area.

Summary history of St Lawrence Jewry parish, from the Worshipful Company of Parish Clerks (in preparation).

Plan of the Parish of St Lawrence Jewry in 1862 from COLLAGE, the London Picture Archive.

A brief report on the parish workhouse is given in City of London Parish Workhouses.