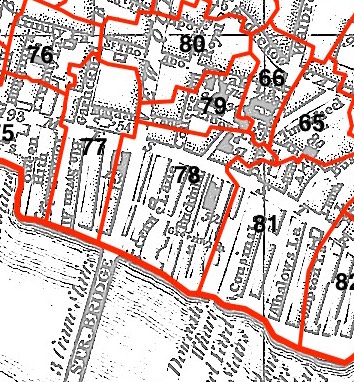 "ST. MARTIN VINTRY, the church of, stood near the south corner of Queen-street, Upper Thames-street, and derived its addition from its situation in the Vintry the ancient mart of the vintners or wine-tunners, wine-merchants and coopers; but sharing the fate of the city in the dreadful fire of 1666, the parish was united to that of St. Michael Royal, College-hill, by act of parliament." [James Elmes. A Topographical Dictionary of London and its Environs (1831) - transcribed by Brian Randell]

This parish - no. 78 in the above map - is located in Vintry Ward.
The church was destroyed in 1666 and not rebuilt.
The parish was later united with St Michael Paternoster Royal 1670.

Online Parish Register Images and Indexes for St Martin Vintry parish are provided by, or at various subscription sites via, the LDS FamilySearch wiki.

Independent/Congregational is the only identified non-Church of England denomination in St Michael Royal with St Martin Vintry [LDS FamilySearch Wiki].

You can see pictures of St Martin Vintry which are provided by:

You can see the administrative areas in which St Martin Vintry has been placed at times in the past. Select one to see a link to a map of that particular area.

Plan of the Parish of St Martin Vintry in 1818 from COLLAGE, the London Picture Archive.