"This very extensive parish is situated in the heart of Sherwood Forest, and contains some fine old woodland scenery, many modern plantations, and several open tracts of forest land, which afford good pasturage for sheep. A large portion of it was not enclosed till 1818, and 1,823 acres forms the beautiful park and pleasure grounds of Thoresby Hall, exclusive of 1,752 acres in Pearlthorpe, from which it stretches northward to Carburton, near Clumber and Welbeck, southward to the market town of Ollerton, and westward to Clipstone Park, extending to within three miles of Mansfield. The rivers Medin and Maun traverse it from east to west, as also does the Duke of Portland's Flood Dike, by which such fertility is produced that three crops of hay are annually got, with abundance of grass, on this once barren district. Besides the church at Edwinstowe, the parish has two chapels of ease and a parochial chapelry. It contains 2,635 inhabitants and 18,644 acres, divided into six townships. Edwinstowe is a large village, pleasantly situated on a gentle declivity 2 miles west of Ollerton. It contains 1,006 inhabitants and 5,815 acres of land. It is extremely rural and the church, dedicated to St Mary, is a venerable structure with nave, chancel, side aisles, tower, and lofty spire, which was repaired in 1816, and may be seen at a considerable distance. It is highly ornamented with "turret-looking Gothic niches", and has annexed to it the chapels of Ollerton and Carburton. The living is a vicarage, valued in the King's books at £14, now £632."
[WHITE's "Directory of Nottinghamshire," 1853]

Edwinstow Library is on the High Street, down toward the River Maun. It is normally closed on Mondays and Wednesdays. The library has a Facebook presence and the staff are acquainted with family history research.

Edwinstowe is a large township, a village and was an extensive parish in the middle of Sherwood Forest. It is divided by the A6075 trunk road east out of Mansfield and west out of Tuxford. At one time the parish included the market town of Ollerton and the townships of Budby, Carburton and Clipstone. The parish covered 17,649 acres in 1881 and included the hamlets of Thoresby, Blackcliff Hill, Kingstand and Car Brake (or Car Brecks). Since 1901, the parish has covered only 4,407 acres

The village lies on the north bank of the River Maun. If you are planning a visit:

You can see pictures of Edwinstowe which are provided by:

You can see the administrative areas in which Edwinstowe has been placed at times in the past. Select one to see a link to a map of that particular area.

Edwinstowe Hall was, for a period, the home of the Earls of Scarborough.

David BEVIS provides a photograph of Edwinstowe Hall on Geo-graph, taken in May, 2013.

Here is a photograph of Clipstone Archway House, provided by (and copyright held by) Matthew BATES: 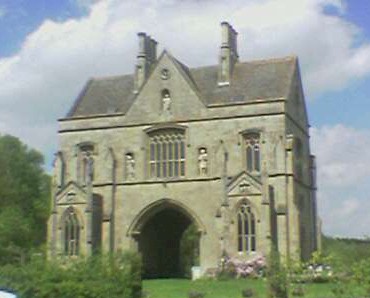 The list of names can be seen at: Southwell and Nottingham Church History Project.

"CAPTAIN HUGH B. T. HUME of the 8th Battalion Sherwood Foresters was invalided home from France on Saturday suffering from “an internal complaint”. He had been drafted to India shortly after his wedding a year ago to Miss Muriel Wright of Edwinstowe House; and was moved to the Western Front only a few weeks ago.
The gallant Captain is staying at Edwinstowe House and reported to be making a steady recovery."