SHREWSBURY - An Aerial View of the Town 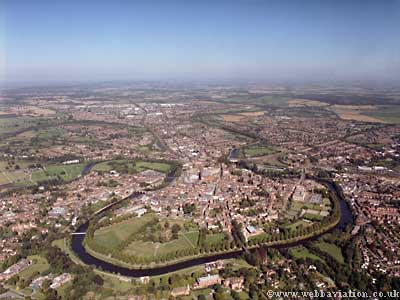 This image is provided for GENUKI by courtesy of Jonathan Webb.
Visit his site www.webbaviation.co.uk for more overall views of Shropshire,
and of many towns and villages elsewhere (mainly) in the north of England.

"The town stands on several gentle eminences, but chiefly occupies a peninsula formed by the winding course of the Severn, which is crossed by two bridges, called English and Welsh bridges, on account of their respective situations. It formerly lay wholly within the curve of the river, but has gradually extended on the E. and W. sides into suburbs, forming Abbey Foregate and Calchan on the E., and Frankwell on the W.; and also beyond the neck of the peninsula and the castle to the N., forming Castle Foregate."

[Extract from The National Gazetteer of Great Britain and Ireland (Shrewsbury, 1868)
Transcribed by Colin Hinson ©2011]