Whitchurch - An Aerial View of the Town 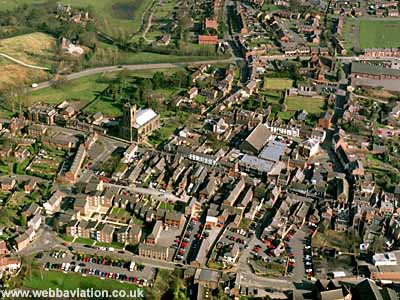 This image is provided for GENUKI by courtesy of Jonathan Webb.
Visit his site www.webbaviation.co.uk for more overall views of Shropshire,
and of many towns and villages elsewhere (mainly) in the north of England.

"(Whitchurch) is situated on the borders of Wales, from which it is separated by a stream called the Red Brook, and has three small lakes, called Osmere, Blackmere, and Brown Moss-water. The site of the town is on the old road from London to Chester... The church, dedicated to St. Alkmund, was rebuilt in 1713 on the site of an ancient Gothic edifice, and contains several monuments of the Earls of Shrewsbury, including an effigy in stone of John Talbot, first Earl of Shrewsbury, and Marshal of France in the reign of Henry VI., surnamed the English Achilles, who was slain in France in 1453."

[Extract from The National Gazetteer of Great Britain and Ireland (Whitchurch, 1868)
Transcribed by Colin Hinson ©2003]