On the steep, white, chalk cliffs between Filey Brig and Flamborough Head, from the turn of the century (and probably before) until at least 1950, the egg gatherers were at work. The season was from the middle of May to the end of June, and became quite a tourist attraction, especially on the Speeton/Bempton cliffs above the south end of Filey Bay. The precipitous, almost perpendicular cliffs have cracks and narrow ledges, chosen by thousands of sea birds, guillemots, kittiwakes, puffins and razor bills, for a rookery. To the uninitiated they are all "seagulls" and they get on well together, but not with the herring gulls, who made their rookery seven miles away, to the immediate north of Filey Brig.

It was just such an accident that befell the egg climber Joss Major on 7th June, 1910, when he was struck on the head and knocked unconscious. Finding that he did not respond to their signals his mates lowered him, and one of them went down to see what had happened. When the news was relayed to the men at the top a visitor from York, Mr. H. Brown, ran four miles to Flamborough, then cycled to Bridlington for Dr. Wetwan, who drove to the scene and immediately went over the cliff. He found Major with a jagged head wound and a fractured skull and, when it was realised that the climber could not be raised in the normal way, elected to wait with him until the Rocket Brigade arrived to rescue the injured man and take him to Lloyd's Hospital at Bridlington. When Dr. Wetwan appeared over the cliff he was cheered but said modestly that he didn't know why there was such a fuss about an action that was only plain duty, when men and boys risked their lives daily for a few eggs.

The accident did not stop the egg gatherers from continuing their dangerous work, for it was not a common occurrence, but it probably added to the anxiety of their families. 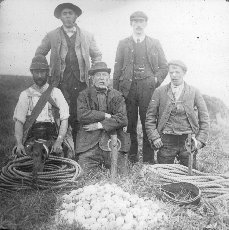 Source:
articles by my grandfather, George FORREST FRANK, for
the Yorkshire Herald ("THE YORKSHIRE COAST" by an Old
Shellback), published 15th July, 1899, and the Evening Post, published
5th June, 1910.

Written by Pam Smith
from articles by her Grandfather