These photographs were taken by Doreen Laycock and me on the morning of Thursday 18th June 2015. The weather was overcast but dry.

The East Yorkshire Family History Society transcribed the stones about twenty years ago, and these transcriptions can be found in full in the booklet published by the EYFHS. However, there have been some changes in the intervening years. Firstly the cemetery remains in use so any burials which have taken place since the EYFHS visited it are not recorded in their book although we have photographed them. Secondly, many of the stones have become eroded, have fallen over or have become overgrown. For this reason we have been unable to find some of the inscriptions recorded by the EYFHS, and we have only been able to identify others by their position in relation to neighbouring stones. We have, however, taken pictures of all the memorials we could find, even those which have no inscription. With larger graves, where more than one person has been buried in the same plot, or the wording was partially hidden by flowers we have taken multiple images of the same grave. These have a suffix of a number in brackets. Compared to the churchyard, however, with (I think) one exception, there are no two people of the same name buried in the same grave. This probably reflects the greater range of forenames in use since the late Victorian age and the abandonment of the tradition of naming children after their parents and grandparents.

These photographs were taken by Lisa Blosfelds and Doreen Laycock on Thursday 18th June 2015. Our intention was to provide a virtual tour of the cemetery and to allow anyone looking for an ancestor's grave to see where it is in relation to other graves. The cemetery was originally opened in 1885, presumably because the churchyard itself was full. It was subsequently extended in 1956 and remains in use to this day. The graves in the new section seem to be more closely spaced than those in the old section. The old section is divided from the new one by the remains of a hedge, and only the gates of the new section can be opened, the old ones being corroded shut. There is a central path down the middle of each section. The cemetery is situated a few hundred yards to the north of Kilham, bounded to the west by the Kilham to Rudston road. Otherwise it is surrounded by open fields in a very pleasant rural setting which is made even prettier in June by the wild flowers in the fields and hedgerows. The plan of the cemetery is based on a tracing of an image from Google Earth. 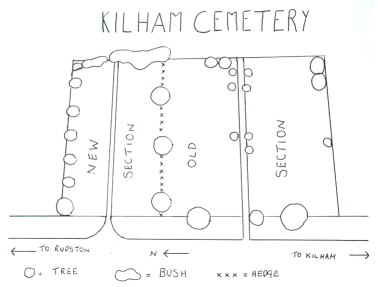 The links given below for the grave names take you to the first page for the relevant grave of that name.

There are three sizes of photos: the thumbnail images which link to a page containing a larger image (640 by 480 pixels), and then a full size image which is linked from the previously mentioned larger image. The full size image can of course be saved for your own personal use.