The Manor of Arncliffe and the Mauleverers.

INGLEBY ARNCLIFFE:
The Manor of Arncliffe and the Mauleverers.

There was a manor at Arncliffe at the time of the Domesday Book (1086), when both Ingleby (Englebi) and Arncliffe (Gerneclif) were properties held directly by the king, having been seized from their pre-Norman owner Malgrin. Some twenty years later they were assigned as part of the honor of Robert de Brus, a knight recently arrived from Briis in the Cotentin Peninsula of Normandy. By the thirteenth century the manor of Arncliffe was in the possession of the Ingram Family. At some point the Arncliffe manor and estates passed by marriage to the Colville family of Dale, who held it in 1418. In this year Sir John Colville, then in his early twenties, was in Harfleur in Normandy enrolled in the army of Henry V, prosecuting the Hundred Years War. There he died in late 1418, probably of disease, since there were no major battles in that year. Lacking male issue, the Arncliffe estate eventually passed to his aunt, Joan Colville, who was married to William Mauleverer of Wothersome. The Mauleverers had, for three hundred years, been tenants of the manor of Allerton Mauleverer, also under the lordship of the de Brus family of Skelton, and had gained the Wothersome estate by the marriage of a younger son.

The Mauleverers retained the Arncliffe property for three hundred years, until, in 1785 Thomas Mauleverer died without living male issue and the estate passed to his daughter Anne, who married Clotworthy Gowan. A grandaughter of Clotworthy Gowan (the family changed their name to Mauleverer) inherited the property and married Douglas Brown, QC. of London. Their son, William Brown sold the estate to Sir Isaac Lothian Bell, Baronet, of Rounton Grange, whose descendants continue to occupy the mansion. The presentArncliffe Hall is that built by Thomas Mauleverer in 1745, which replaced the previous structure, built in the late seventeenth century by William Mauleverer. 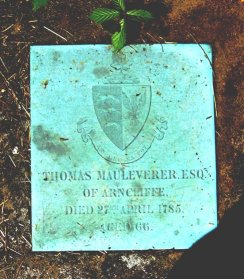 Bronze plaque in the Arncliffe churchyard to the memory of Thomas Mauleverer,
who died in 1785. He was a distinguished lawyer and the last of the Mauleverer
male line to be lord of Arncliffe.
(photo: © Michael Harris)

This brief summary is based on the extensive article in the Yorkshire Archaeological Journal, Volume XVI, 1902, by William Brown, F.S.A., who was then the owner of Arncliffe Hall. Many of the historical documents on which he based his work, with dates from the twelfth century onwards, are now in the archives of the North Yorks County Record Office at Northallerton.

Below are the remaining Mauleverer and Brown plaques in the family grave area. (photos © Colin Hinson 2011)