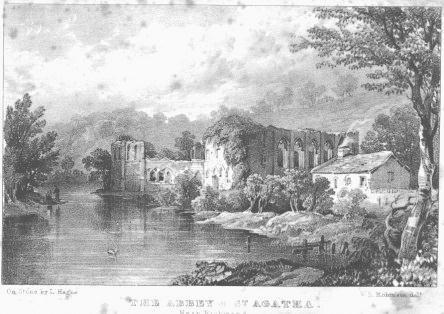 Originally founded in 1152, by Roaldus, constable of Richmond Castle, and inhabited by Canons of the Praemonstratensian order, or "White Canons." Its revenues were afterwards considerably augmented by the Lords Scrope, of Bolton, who, from this circumstance, procured a lease of the Abbey and Lands from Henry VIII. at the dissolution. It is now the property of Robert Jacques, Esq., whose substantial mansion stands on the top of the hill, at a short distance from the ruins.

The enclosure in which the abbey stands, is entered by a door near the Mill. It is now impossible to identify the exact uses to which the different parts of the building were applied, but a few of the principal apartments may be clearly recognized.

Nearest to the parish church, stands the Great Hall, or Refectory, 102 feet long, by 27 wide. The floor was supported by groined arches, resting in the centre on a row of pillars. At the east end is a large pointed window, the beautiful tracery of which is almost entire. It belongs to the era of Edward II. or III. At the opposite end is the fire-place, and, in the lower apartment, is a door-way which led by a flight of steps to the Great Kitchen.

There are also, six other elegant windows on the south side, the second of which, from the east, appears to have been used as the Reading Gallery, from which portions of the Fathers, and other Theological Works were read to the Monks at meal times, by one of their brethren. To the west stood the Kitchen, the great fire-place of which is very perfect :- and adjoining to this, the Pantry, Cellar, &c., yet remain entire.

At the north-east of the Refectory, are the walls of another large room, 40 feet long, by 21 wide, supposed to have been the Chapter House and was lighted by a very large east window, in the Tudor style of architecture; this window has frequently been taken for the principal entrance but a slight examination of the side walls, will shew that it did not descend to the floor; the holes are also distinctly visible, which admitted the iron cross bars, and even the groove which received the edge of the glass, is decidedly marked. Within the middle arch, on the south side of the room may be traced a doorway, now walled up, which led into the lower story of the tower, to which, it has always been supposed, there was no access except from above.*

Over the Chapter House was another apartment, also lighted by a handsome east window, and said to have been the Scriptorium where the monks employed themselves, previously to the invention of printing, in transcribing such works as their library afforded, or in copying and illuminating missals, and other books used in their church service.

On the opposite side of the inner court, near its south-west corner, stands a richly adorned Anglo-Norman doorway, consisting of two clusters or round columns, supporting a circular arch, covered with rows of carving, -the two inner ones consisting of the heads of wild animals, and the outer one of foliage. This is, probably a relic of the ancient edifice built by the constable Roald and was preserved by lord Scrope on his enlarging and rebuilding the abbey.-Adjoining to it, of a more modern date, are two ornamented niches, (surmounted by a pointed arch and other carvings) each of which contained an image but one only remains, in a very mutilated state.

Returning to the eastern side of the court, we may next notice the abbey Church, which projects out to the eastward, beyond the neighbouring buildings. Within the northern wall are two recesses, in which stood, as tradition reports, the monuments of the founder and his wife. Between this part of the building and the chapter house, are the remains of what is said to have been the south transept of the abbey church; but a glance upwards will discover, in the higher story, a fire-place and other architectural arrangements, which seem to give it a more domestic character.

Further to the north, are the private apartments of the Abbot and his personal attendants, among which may be noticed, a fire-place and chimney in a very perfect condition; and a little beyond, in the upper story, are two doorways, opposite each other, of a singular construction. Still further, (and on the right hand side) is the private chapel, or oratory, of the abbot, lighted by a handsome east window, near to which is a small neat piscina. At the northern extremity of the ruins, down a narrow descending passage, is an arch, which tradition points out as the entrance of a subterraneous passage, either to the Castle or to St. Martins. It was, probably, nothing more than a drain communicating with the mill-race which runs past the abbey, a few yards to the west.*

*Grose, in his description of Kirkstall Abbey, notices a similar report of a subterraneous passage, and remarks, that "there is scarce an old Monastery in England but has some such ridiculous story told of it,"

On the Green, to the south of the ruins, stands a venerable half-decayed tree, which still retains the name of THE ABBOT's ELM; and on the river side is the ancient Barn, &c., belonging to the abbey: -the oaken woodwork of the Roof is an interesting specimen of old carpentry. Passing the Parish Church, (which contains several fragments of stained glass, formerly belonging to the abbey,) we approach the great gateway of the abbey. The entrance on each side is under a double arch of singular construction; at the first glance it might appear that the pointed arch being found insufficient, the circular one has been added to support it: -but on a nearer inspection, it will be perceived that this could not be the case, as the capitals of the columns consist each of an entire stone, supporting, at the same time, the round and pointed arches. The upper apartment was the Record Room, in which the abbots' courts were held, and the charters and other muniments belonging to the abbey were preserved: it is now used as a granary. It is lighted by three small windows, of elegant dimensions and workmanship.

The different parts of the abbey have suffered much from the fragments being carried away for other uses, as well as from the corroding hand of time.

It will always be a matter of regret, both to the antiquary and the man of taste, that these splendid buildings were allowed so generally to fall into a dilapidated state -but surely no rational and reflecting person, whether of the Romish or English Church, can deliberately wish for a return of those "good old times," when the noble murderer, and the titled marauder, were led to expect pardon and eternal happiness, provided they spent a portion of their ill-gotten wealth in founding Monasteries, where lazy monks might prolong the dreary repetition of masses for their souls' repose.

ABOUT half-way up the hill, on the road leading to the village of Easby, is a remarkably distinct Echo.

Passing through the village of Easby, towards Richmond, we arrive at a very interesting object which crosses the Richmond and Darlington road, just at the point where it meets the Easby Lane -the SCOTS' DYKE, a rude earthen embankment and trench supposed to have been a boundary between the Britons and Picts before the arrival of the Romans. There can be no doubt that it is more ancient than the walls of Adrian and Severus, as the latter appear to have been cut through it. It enters England at a place called Wheelfell, between the rivers North-Tyne and Read, passes into the county of Durham at Shorn Gate Cross: -crossing the Tees at Winston, it comes past Stanwick, hither: and after crossing the Swale, and up St. Martin's pasture, it stretches by Sand-beck over Hudswell Moor.

On the brow of the hill, commanding a fine prospect, stands a building generally known as ST. NICHOLAS'S: