IT would be a very difficult task to do justice to this place in the way of description, not only from its intrinsic beauties and the nature of its scenery, but from the associations it must have formed in the minds of every one who has read Sir Walter Scott's well known Poem. To the stranger, however, it will not, it is presumed, be entirely useless to direct him to some of the leading and most prominent objects which this delightful spot contains. But first, let the antiquary inspect the well preserved Roman encampment lying between the river Greta and a brook called the Tutta, close behind the George Inn, and surrounded by a triple ditch. The entrances are easily to be discerned. Very many Roman altars and monuments have been found in the vicinity, most of which are preserved at Rokeby.

After entering the Park by the South Gate, the road winds in a circuitous course through the grounds, and here and there a vista opens, affording an agreeable peep at Rokeby Hall, a plain and unassuming building of modern date, erected upon the site of the ancient edifice. I shall here quote the description given by Sir Walter Scott, of the banks of the Greta, &c. 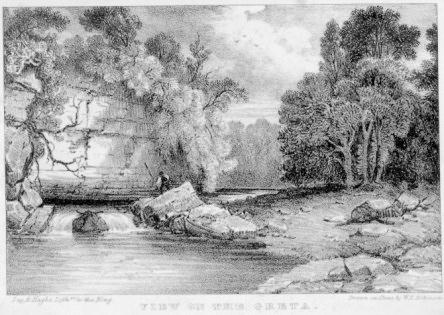 "What follows, is an attempt to describe the romantic glen, or rather ravine through which the Greta finds a passage between Rokeby and Mortham, the former situated upon the left bank of the Greta, the latter on the right bank, about half-a-mile nearer to its junction with the Tees. The river runs with very great rapidity over a bed of solid rock, broken by many shelving descents, down which the stream dashes with great noise and impetuosity, vindicating its etymology, which has been derived from the Gothic Gridan, to clamour. The banks partake of the same wild and romantic character, being chiefly lofty cliffs of limestone rock, whose grey colour contrasts admirably with the various trees and shrubs which find root among the crevices as well as with the hue of the ivy, which clings around them in profusion, and hangs down from their projections in long sweeping tendrils. At other points the rocks give place to precipitous banks of earth, bearing large trees, inter-mixed with copse-wood. In one spot the dell, which is elsewhere very narrow, widens for a space to leave room for a dark grove of yew trees, intermixed here and there with aged pines of uncommon size. Directly opposite to this sombre thicket, the cliffs on the other side of the Greta are tall, and fringed with all kinds of deciduous shrubs. The whole scenery of this spot is so much adapted to the idea of superstition, that it has acquired the name of Blockula, from the place where the Swedish witches were supposed to hold their Sabbath. The dell, however, has superstitions of its own growth, for it is supposed to be haunted by a female spectre, called the Dobie of Mortham. The cause assigned for her appearance is a lady's having been whilom murdered in the wood, in evidence of which, her blood is shewn upon the stairs of the old tower, at Mortham. But whether she was slain by a jealous husband, or by savage banditti, or by an uncle who coveted her estate, or by a rejected lover, are points upon which the traditions of Rokeby do not enable us to decide."
Data transcribed from:
Robinson's Guide to Richmond (1833)
Scan, OCR and html software by Colin Hinson.