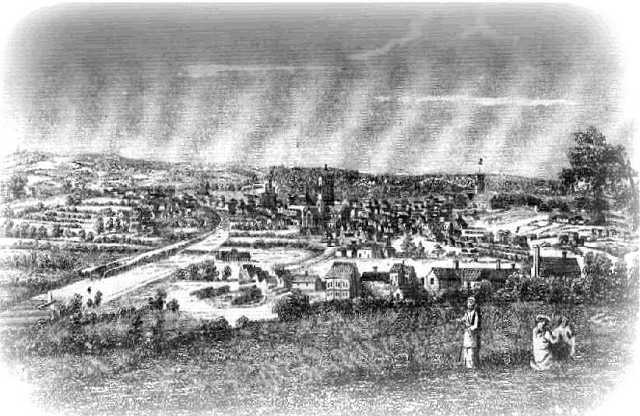 The Ancient View of Leeds from Cross Green, Knowsthorpe.

On this Leeds scan you can just make out the numbers 1 to 6 in the picture (only just)
They are:
1. Parish Church
2. St Johns Church
3. Charity School, top of Lady Lane
4. River Aire
5. Alderman Atkinsons's House
6. The present (1862) of Central Market & Call Lane Chapel.
Other Turretts in ths Prospect: The New Cloth Hall, Alderman Cookson's & Mr. Thoresby's.

The following places, so familiar to the people of Leeds, are mostly derived from the language of our Anglo Saxon ancestors. Leeds is supposed by Thoresby to be derived from the British 'cair loid coit', a town in the woods; by Bede from the first Saxon possessor named Loidi, others suppose it to be derived from our German ancestors, as there is a town called Leeds, on the river Dender in Austria Flanders, near which is the village of Holbeck. Briggate, the Bridge gate, Kirkgate, the Church-gate, Swinegate, so called from leading to a beck or stream where those animals were washed. Boar Lane had probably a similar derivation.

1080 - Leeds, Holbeck, and Woodhouse were given by the Conqueror to Ilbert de Laci. Leeds was then only a farming village, with an estimated population of somewhat less than 300, and not more than 900 in the whole parish, including a priest, a church, and a mill.

The circumference of this borough of Leeds is 32 miles and one furlong, and its superficial contents are 21,470 acres and nine perches.

The Castle of Leeds - It is probable that the Castle of Leeds was erected about this time by the De Lacies of Pontefract. It occupied the site at present (1862) surrounded by Mill Hill, Bishopgate, and the western part of Boar Lane. It was in all probability surrounded by a moat, and an extensive park, as we may gather from the names Park Row, Park Square etc.

In excavating for the foundations of the warehouses on the south side of West Bar, in 1836, the workmen discovered the remains of the Castle Moat. It appeared to have had a semicircular form, and to have terminated in the Mill Goite, extending considerably on each side of Scarborough's Hotel, on which site the castle is supposed to have stood. A tower aslwo stood near Lydgate in Woodhouse Lane, called Tower Hill; which was probably connected with the castle; but not a vestige of either fabric remains.

1533 - Leeds is described at this time as - 'two miles lower than Christal Abbey, on Aire river, is a praty market, having one paroche churche reasonably well buildid, and as large as Bradford, but not so quik as it.'