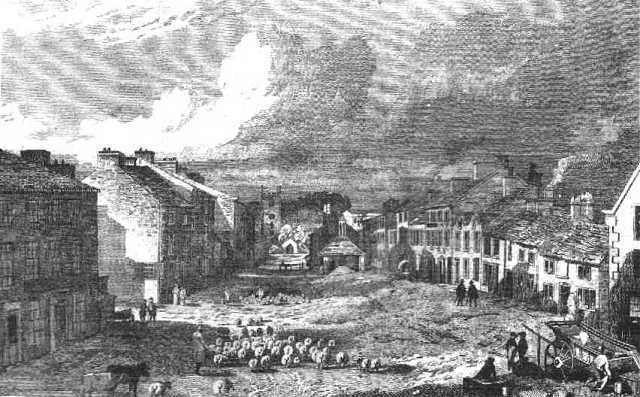 1090 A.D.    Skipton Castle, built by Robert de Romille, who also founded the original church, dedicated to the Holy Trinity. In the civil wars, this place was garrisoned for King Charles 1., the command devolving on Sir John Mallory, of Studley. It was surrendered December 20th 1645, having held out longer than any other castle in the north of England. The castle chapel was in existence subsequent to the death of Thomas Earl of Thanet. the Clifford family have, with only one exception of attainder held the barony 500 years.

1657 - Skipton Castle was this year re-built by Lady Clifford, countess dowager of Pembroke, having laid in ruins from December, 1648, when it was demolished by order of Parliament.

1842 -The church of Saint John the Evangelist, erected in 1842, is a building of stone, consisting of chancel, nave, south porch and a western tower containing one bell: there are 150 sittings. The register dates from 1842.

1853- On Sunday the 19th of June, about noon, a storm passed over the town of skipton, which very much injured the parish church. The electric fluid struck the south west pinnacle of the church, causing it to fall with a tremendous crash. The estimated weight of the pinnacle which fell was a ton and a half. It was broken into splinters. One large piece being carried a considerable distance fell near the Castle Inn, and broke part of the causeway. Another portion of the pinnacle nearly a ton weight dropped down upon the flags in the yard, breaking them and embedding itself in the ground. The accident occurred just before the close of the morning service, and the congregation wre so alarmed by it that they rushed out of the building without their hats and in the greatest fear.