THE BRITISH WORKMAN: The British Workman, transcribed by Graham Metcalf. 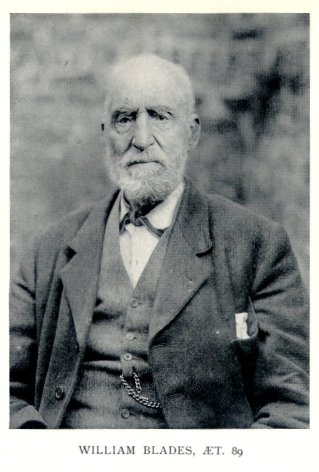 Here is a picture of William Blades,

the subject of this book

My aim in writing the following pages has been twofold : firstly, to give some insight into the nature and conditions of the daily life and work of the agricultural labourer about the middle of the last century in a part of the country with which I am most familiar ; and secondly, to contrast the character and amount of the work performed by farm hands and others at that period as compared to what it is now.

In studying the history of our country we are apt to regard only great events : its political, industrial, and economic changes and movements ; its wars and conquests, its scientific discoveries, its literature, and so forth. To many of us, however, the homely life and work of our country folk may often be of greater interest than heroic achievements.

What I have here set down has been written mainly round the life of a remarkable character, who described himself to me as a 'British Workman' ; and he has certainly proved himself worthy of that honourable title. We can only wish that there were more of his calibre in these days.

Had I known my venerable friend earlier in his career, many more incidents connected with his work might have been recorded ; but perhaps enough has been said to show what work meant in days gone by ; and let us hope that the consideration of that objectlesson may cause some to take a higher view of it than that which now too commonly prevails.

My cordial thanks are here accorded to Mr. William Blades for so readily and willingly supplying me with information connected with the story of his life. My interviews with him always afforded me much pleasure and interest.

In writing Chapter X I have been indebted to a little volume entitled Ploughing and Sowing, which gives an account of the late Miss Mary E. Simpson's devoted labours among the farm lads in the neighbourhood of her old home in the East Riding.

The frontispiece is reproduced from a photograph by Mr. E. W. Bielby, of Great Driffield, to whom my thanks are here given.