AGHAGALLEN, or AUGHAGALLON, a parish, in the half-barony of UPPER-MASSAREENE, county of ANTRIM, and province of ULSTER, 2 miles (N. W. by N.) from Moira, on the road from that place to Antrim 5 containing 3574 inhabitants. It is bounded on the west by Lough. Neagh, and comprises, according to the Ordnance survey, 7885 statute acres, of which 2415 acres are in the lough: the land is chiefly under an improved system of tillage; there are about 300 acres of bog, but no waste. Many of the inhabitants are engaged in weaving linen and cotton, and some in spinning. The parish is intersected by the Lagan canal from Lough Neagh to Belfast. It is a vicarage, in the diocese of Connor, and is part of the union of Magheramesk; the rectory is impropriate in the Marquess of Hertford.

The tithes amount to £66. 10., of which £26.10. is payable to the impropriator, and the remainder to the vicar. The church has long been, in ruins. In the It. C. divisions it is the head of a union or district, called also the union of Ballinderry, which comprises the parishes of Aghagallen, Aghalee, Ballinderry, and Magheramesk, and contains two chapels, one of which is in this parish. The parochial school is principally supported by the vicar; and there are three private schools and a Sunday school.

Aghagallon is a civil parish and also the name of both a village and a townland within that civil parish. Note that Aghagallon Village lies almost entirely with Derrynaseer townland; not Aghagallon townland as you might expect. 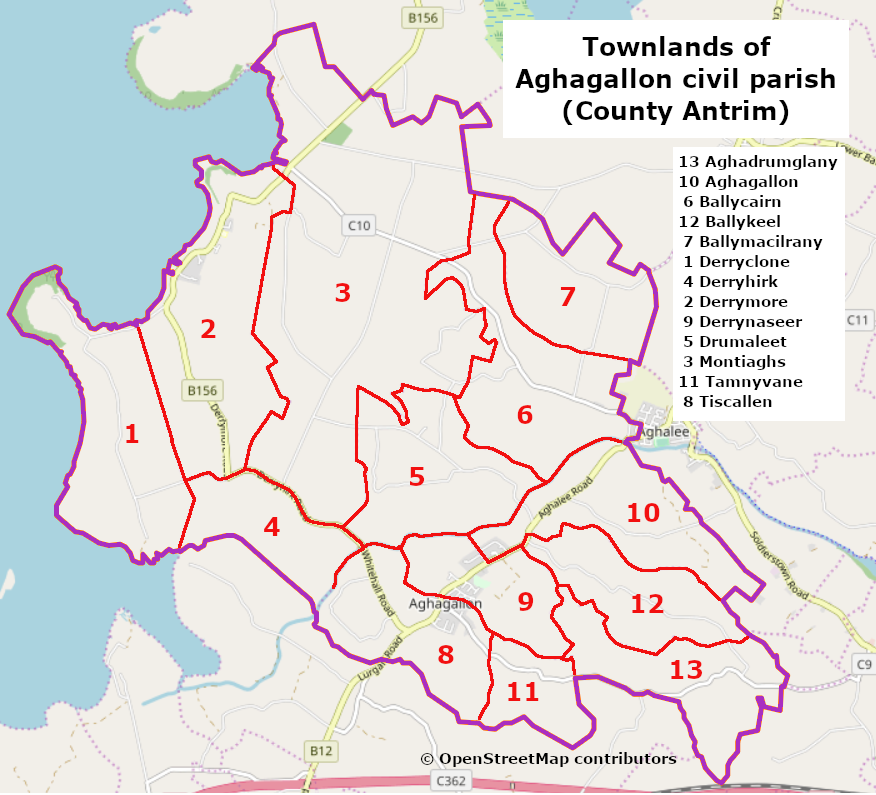