MILTOWN MALBAY A post-town, in the parish of Kilfarboy, barony of Ibrickane, county of Clare, and province of Munster, 23 miles (W.) from Ennis (by Ennistymon), and 1341/2 (W. S. W.) from Dublin, by way of Limerick ; containing 133 houses and 726 inhabitants. It is situated near the western coast, and contiguous to the great recess which, from its dangerous shore, is called the Malbay. Owing to the exertions of the late Mr. Morony, this place, since the commencement of the present century, has risen from a mere hamlet to be a fashionable bathing-place ; and among the houses, which are in general neatly built, are several of a superior description, occupied as bathing-lodges during the season. Near Spanish Point (so called from part of the Spanish Armada having been wrecked there in the reign of Queen Elizabeth) is the hotel, forming with its out-offices a handsome and extensive range of building. It was erected, in 1810, by a company, consisting of the Morony family and other gentlemen, and, besides the usual accommodations of an hotel, contains hot and cold baths, billiard-rooms, and a spacious assembly-room ; it commands extensive views of the Atlantic, and adjoins the bathing strand, which is considered one of the best on the western coast : attached is stabling for nearly sixty horses. Though devoid of wood, the fine sea views, the elevation of the land and the dryness of the soil, together with the excellent roads in the vicinity, combine to render this place agreeable ; and it is in consequence frequented during the bathing season by fashionable visiters from various parts of the country, for whose amusement races are occasionally held. Fairs are held on Feb. 1st, March 9th, May 4th, June 20th, Aug. 11th, Oct. 18th, and Dec. 9th, for general farming stock. Quarter sessions are held here in June ; petty sessions weekly on Thursday ; and a court for Lord Egremont's manor of Moih Ibrickane monthly, for the recovery of small debts : near the town is a station of the constabulary police. Here are the parish church and the R. C. chapel of the district, which, together with the seats in the vicinity, are noticed under the head of Kilfarboy. At Freagh, on the coast, is a natural curiosity called the "Puffing Hole," which spouts water with great force to a considerable height, and when the sun shines forms at each emission a beautiful iris. At Cassino, in the vicinity, is a chalybeate spa.    Samuel Lewis, 1837

You can see pictures of Milltown Malbay which are provided by:

Ask for a calculation of the distance from Milltown Malbay to another place.

The civil parish of Kilfarboy contained the following townlands: 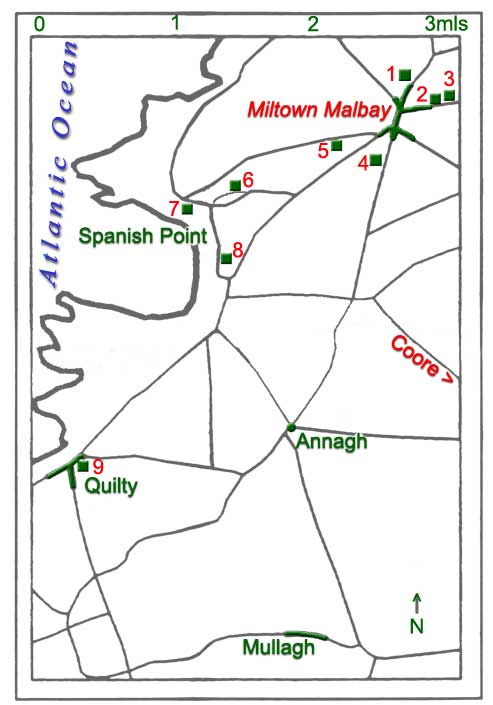