DRUMBEG, a parish, partly in the barony of UPPER-BELFAST, county of ANTRIM, but chiefly in that of UPPER-CASTLEREAGH, county of DOWN, and province of ULSTER, ¾ of a mile (N. E.) from Lis burn, on the road to Belfast; containing 2883 inha bitants. According to the Ordnance survey it com prised 27Q4¾ statute acres, of which 1186¾ were in Down, and 1518 in Antrim; of these, 2627 were applot ted under the tithe act, and valued at £3367 per ann.: but a portion of the parish of Drumboe having been lately added to it under the Church Temporalities' Act, it now comprises 6868 acres. The soil differs greatly in quality, from a sandy loam to a stiff clay, but is very fertile. The Lagan navigation from Belfast to Lough Neagh passes through the parish. The principal seats, besides those noticed under the head of Dun murry (which see), are Glenburn, the residence of F.Crossley, Esq.; Wilmont, unoccupied; Finaghey, of J. Charley, Esq.; Larkfield, of Henderson Black, Esq.; Drumbeg Rectory, of the Rev. J. L. M. Scott; Drum House, of W, H. Smyth, Esq.; and Belvidere Cottage, a neat and commodious residence, lately built on the property of A. Durham, Esq. Ballydrain, the beautiful demesne of Hugh Montgomery, Esq., though not in this parish, is within 200 yards of the church, and with the adjoining grounds of Lakefield, the residence of Miss Richardson, and Lismoyne, of Mrs. Callwell, presents one of the finest landscapes in the neighbourhood of Belfast. A court leet and court baron are held every third week at Four Land Ends, for the manor of Drum bracklin, by a seneschal appointed by Narcissus Batt, Esq., lord of the manor, with jurisdiction for the recovery of debts under £20, extending over the townlands of Doneight and Lisnoe in the parish of Hillsborough, Ballyaulis in this parish, and Ballycairn, Ballylesson, Molough, and Knockbreccan in Drumboe.

The living is a rectory, in the diocese of Down, and in the gift of the Bishop; a part of the rectorial tithes is impropriate in W. Charley, A. Durham, and Narcissus Batt, Esqrs., as lessees under the Marquess of Donegal. The tithes now amount to £336. 16. 6., of which £94. 13. 6½. is payable to the impropriators, and the remainder to the incumbent: the glebe-house was built in 1826, by a gift of £415 and a loan of £46 (British) from the late Board of First Fruits, exclusively of £450 expended by the incumbent in building and improve ments; the glebe comprises eight statute acres. The church was rebuilt by subscription in 1795, by aid of a gift of £461 (British) from the same Board: it has a tower surmounted by a spire, which having been blown down in 1831, was rebuilt at the expense of J. Charley, Esq. About 300 children are educated in five public schools, two of which are on Erasmus Smith's foundation.

You can see pictures of Drumbeg (County Down) which are provided by: 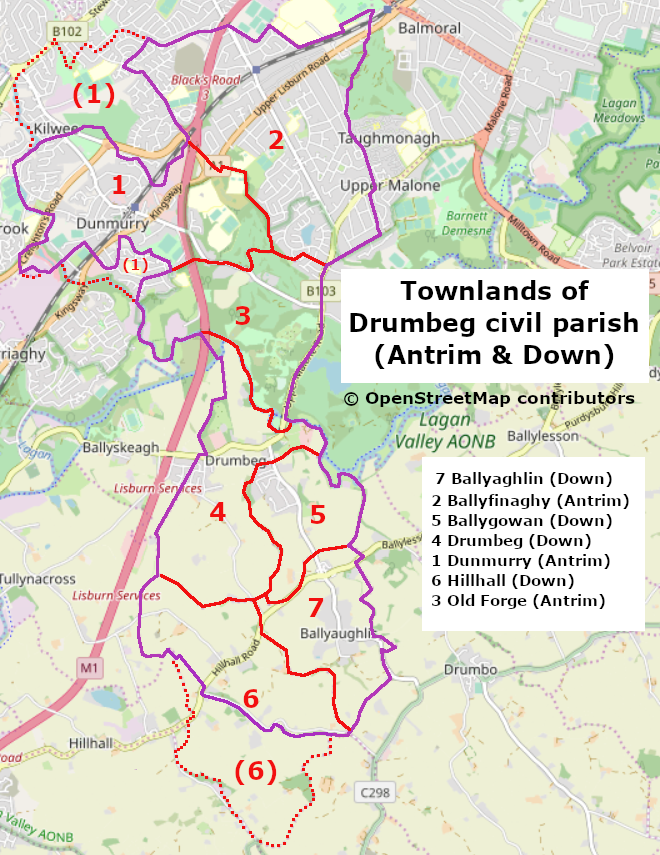