DRUMBOE, a parish, in the barony of UPPER-CASTLEREAGH, county of DOWN, and province of ULSTER, 4 miles (N. E.) from Lisburn, on the river Lagan, and on the old road to Belfast; containing 6429 inhabitants. Twelve townlands of the ancient parish having been lately annexed to Drumbeg, it now comprises 9629 statute acres, chiefly arable, with a very small proportion of woodland, and, except lands belonging to gentlemen who farm their own property, in a very indifferent state of cultivation, though lately much improved: there is a large tract of bog. The weaving of cotton is carried on for the manufacturers of Belfast; and at Edenderry is a bleachgreen. The Lagan opens a communication with Belfast, Lisburn, and Lough Neagh. The principal seats are Eden derry, the residence of W. Russel, Esq.; Edenderry House, of C. Dunlop, Esq.; Belvidere, of A. Durham, Esq.; New Grove, of J. Russel, Esq.; and the elegant lodge and greater part of the demesne of Purdysburn, the splendid residence of Narcissus Batt, Esq.

The living is a rectory, in the diocese of Down, and in the patronage of the Bishop; the tithes amount to £517. The glebe-house was built in 1816, by a gift of £415 (British), and a loan of £46, from the late Board of First fruits, exclusively of £200 expended by the incumbent: the glebe comprises 6½ acres. The church, a handsome Grecian edifice with a lofty tower surDRU mounted by a copper dome, was erected in 1788, by subscription, aided by a grant of £500 from the same Board, a donation of 150 guineas from Mr. Hull, of Belvidere, and of 100 guineas from the Marquess of Downshire. There are places of worship for Presbyterians, Independents, and Primitive and Wesleyan Methodists. Nearly 600 children are educated in the several public schools of the parish; that at Pur dysurn was built at the expense of Mr. Batt, who sup ports the school and also provides residences for the master and mistress, who have about 150 pupils; and the master of a school at Ballymacbrennard receives £20 per annum from the trustees of Erasmus Smith's fund, and has an acre of land given by the Marquess of Downshire. There are also six private schools, in which are about 400 children. Not far from the church is the Giant's Ring, a circular entrenchment enclosing more than 8 plantation acres, perfectly level; in the centre of the enclosure is a large cromlech, or Druids' altar, consisting of seven upright stones supporting a table stone of nearly circular form and sloping towards the east: the land is now let, and the earth-work is being removed for the purpose of cultivation. In the burial ground close to the supposed site of the ancient church was an abbey, said to have been founded by St. Patrick, and of which St. Mochumna was the first abbot; there is also an ancient round tower. In the parish are eightlarge raths, the most conspicuous of which, on the summit of Tullyard, is constructed of earth, loose stones, and vitrified substances, similar to the cairns of Scotland.

It is supposed by some writers that there was anciently a fortified town here.

You can see pictures of Drumbo which are provided by: 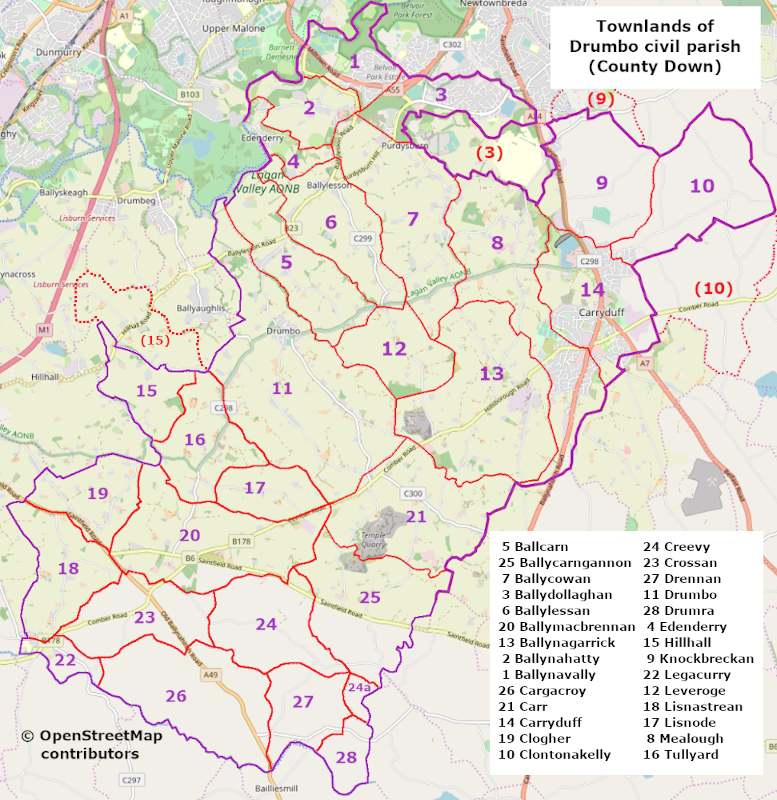