HILLSBOROUGH, a parish and incorporated-market-town (formerly a parliamentary borough), in the barony of LOWER-IVEAGH, county of DOWN, and province of ULSTER, 16 miles (W. N. W.) from Downpatrick, and 70¼ (N.E.) from Dublin; containing 6886 inhabitants, of which number, 1458 are in the town. This place, originally called Cromlyn, derived its present name from a castle erected by Sir Arthur Hill in the reign of Chas. I., which at the Restoration was made a royal fortress by Chas. II., who made Sir Arthur and his heirs hereditary constables, with 20 warders and a well-appointed garrison. The castle is of great strength and is defended by four bastions commanding the road from Dublin to Belfast and Carrickfergus: it is still kept up as a royal garrison under the hereditary constableship of the present Marquess of Downshire, a descendant of the founder, and is also used as an armoury for the yeomanry. At the time of the Revolution, the army of Wm. III. encamped under its walls: and during the disturbances of 1798 the royal army encamped on Blaris moor, within two miles of this place. The town, which is built on the summit and declivities of a hill, consists of one principal and three smaller streets, and contains 214 houses, many of which are of handsome appearance; it is well paved, partially lighted, and amply supplied with water conveyed by pipes from the neighbouring hills. The approach from the Dublin road has been widened, one of the old streets near the castle has been removed, and other considerable improvements have been made.

Races, established under the management of the horsebreeders of the county of Down, incorporated by charter of Jas. II., are held in this neighbourhood and at Downpatrick alternately, and are kept up with great spirit.  The course, called the Maze, about two miles from the town, winds round the base of a hill, from the summit of which the spectators have an excellent view of the races, and an elegant stand has been erected.

The manufacture of linen and cotton is carried on, chiefly for the Belfast merchants; an extensive ale brewery was established in 1810, and a very large distillery in 1826, which has three stills worked by one fire; in these works, which belong to Messrs, Bradshaw and Co., 40 men are regularly employed, and 2000 tons of grain are annually consumed. The Lagan canal from Belfast to Lough Neagh passes within a mile of the town, and a wharf has been constructed on its bank for landing coal and other necessaries. The market is on Wednesday, and fairs are held on the third Wednesday in Feb., May, Aug., and Nov.; the marketplace is spacious, and shambles and grain stores have been erected. Great agricultural improvements have been carried on in the neighbouring district by the present Marquess during the last twenty-five years. By charter of Chas. II. the corporation consists of a sovereign, 12 burgesses, and an indefinite number of freemen, assisted by a recorder (who is also town-clerk), a Serjeantat- mace, and inferior officers. The sovereign is annually elected from the burgesses, and with his deputy is coroner, and, during his year of office and for one year after, justice of peace within the borough; the burgesses are chosen, as vacancies occur, by a majority of their own body, by whom the recorder and other officers are appointed, and the freemen admitted by favour only. The borough returned two members to the Irish parliament till the Union, when the elective franchise was abolished, and the £15,000 awarded as compensation was paid to Arthur, Marquess of Downshire. A borough court and court of record were formerly held, but have been long discontinued. Courts leet and baron are held every three weeks by the seneschal of the Marquess, for the manor of Hillsborough with jurisdiction to the amount of £2 extending over upwards of 26,000 acres in the parishes of Hillsborough, Blaris, Anahilt, Dromara, Dromore, and Moira; and a court of record for the same manor, for pleas to the amount of £200. Petty sessions are held here every Wednesday, and the quarter sessions for the county alternately here and at Newtownards.

The court-house, a handsome building of freestone in the centre of the market-place, was erected by the present Marquess: a district bridewell has been built under the provision of an act of the 7th of Geo.IV.; and a chief constabulary police force has been stationed in the town. The parish comprises, according to the Ordnance survey, 8484¾ statute acres, of which 62½ are water and the remainder good arable and pasture land, the principal part of which is under tillage and in a high state of cultivation. Hillsborough Castle, the seat of the Marquess of Downshire, situated at the west end of the town, is in a demesne richly embellished with wood; in the grounds is a fine lake, and the scenery is pleasingly diversified and highly picturesque.- At the east side of the town is the park, enclosing a space of 1500 statute acres, surrounded by a wall: it also is beautifully situated, richly wooded, and has a fine lake. Within it is the fort above-mentioned, erected by Sir Arthur Hill, in the centre of the west side of which is a castellated mansion, supposed to have been built as a residence for the constable. King William slept in it when his army was encamped in the neighbourhood. It is entered by an arched gateway, which is the only passage into the fort except a sally-port in the eastern side. It was from this place that King William issued his declaration to grant the Regium Donum to the Presbyterian ministers of Ulster. The other seats are Culcavy Cottage, the residence of H. Bradshaw, Esq.; Eglantine, of Capt. Moore; Carnbane, of H. Moreland, Esq.; Shamrock Vale, of Lieut. Clarke, R.N.; and Blaris House, of Col. Hawkeshaw.

The living is a rectory, in the diocese of Down, formerly the head of a union comprising also the parishes of Drumbeg, Drumboe, and Kilclief, together constituting the corps of the archdeaconry of Down, but since the dissolution of the union under the Church Temporalities' act, consequent on the demise of the Rev. R. M. Mant, in 1834, it has solely formed the corps of the archdeaconry: the tithes amount to £550. The glebe-house is a handsome residence, and the glebe comprises-22 acres, subject to a rent of £31. 7. 8.; attached to the archdeaconry are also 235 acres of glebe in the parish of Kilclief. The church, 5 a spacious cruciform structure in the later English style, with square embattled towers at the extremities of the transepts, and a similar tower at the west end surmounted by an octagonal spire, was erected in 1774, at the sole expense of the late Marquess. The interior is finely arranged, the windows are embellished with stained glass, and a powerful and sweet-toned organ was presented by the late Marquess, and has been enlarged and much enriched in tone by the present Marquess, by whom also the church is kept in repair, and the salaries of the organist, choristers and vergers paid. In the R. C. divisions the parish forms part of the union or district of Lisburn, and has a chapel in the town. There are also places of worship for Presbyterians, the Society of Friends, and Moravians. Nearly 300 children are taught in five public schools, of which the parochial schools are supported by the Marquess and Marchioness of Downshire; and there are four private schools, in which are about 200 children, and a dispensary. Hillsborough gives the inferior titles of Earl and Viscount, and Kilwarlin the title of Viscount, to the Marquess of Downshire.

from Lewis's Topographical Dictionary of Ireland (1837).

You can see pictures of Hillsborough which are provided by: 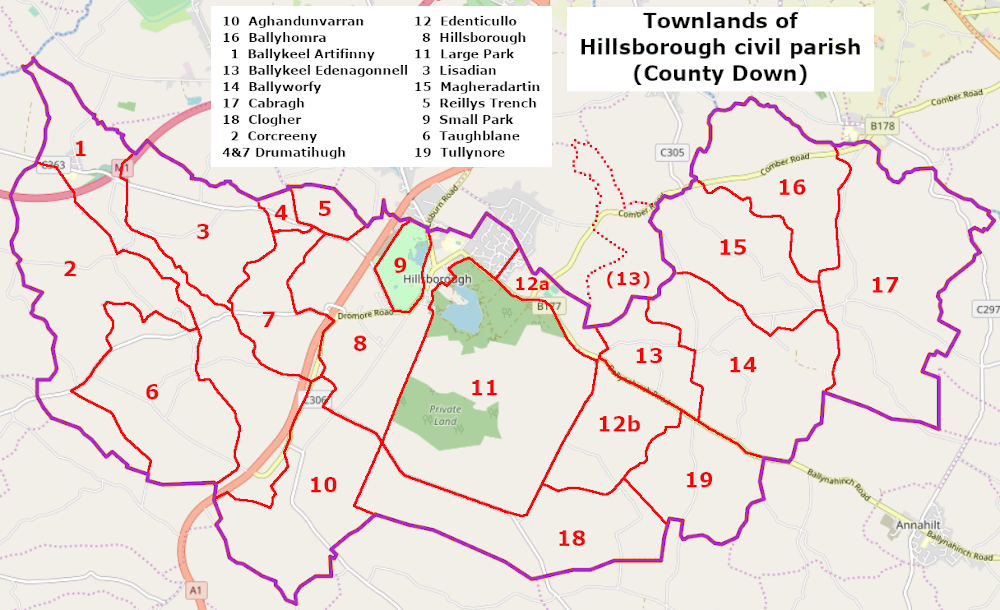