Lambeg civil parish straddles the River Lagan, and so lies partly with County antrim and partly within County Down.

LAMBEG, a parish, partly in the baronies of UPPER-BELFAST and UPPER-MASSAREENE, county of ANTRIM, but chiefly in the barony of UPPER-CASTLEREAGH, county of DOWN, and province of ULSTER, 2½ miles (N.) from Lisburn, on the old road from Belfast to Dublin; containing 1537 inhabitants, of which number, 175 are in the village. The parish, which is pleasantly situated on the river Lagan, comprises, according to the Ordnance survey, 1567 statute acres, of which 376¾ are in the county of Antrim. The land is good and the system of agriculture improved; and the surrounding scenery is pleasingly diversified. Lambeg House, the property and residence of A. Williamson, Esq., is a handsome modern mansion, formerly belonging to J. Williamson, Esq., author of an able treatise on the linen trade, and framer of the laws by which it is now regulated throughout Ireland; he was much persecuted for framing those laws, and was driven from his house and his native country by an infuriated mob. Chrome Hill, also a spacious modern mansion, was erected by R. Nevin, Esq., late of Manchester, who established here some extensive works for printing muslin, in which he first applied with success his invention of the "Ba Chrome," now universally used, and also introduced, the oxyde of ohrome into the ornamental department of the china manufacture, from which circumstance he named his estate. The village is about a mile north of Lisburn, with which and also with Belfast it is connected by houses continued along the road between those towns.

The blanket manufacture established by the Wolfenden family, who settled in this part of the country about two centuries since, is still carried on. On the river Lagan are two large bleach-greens; and further down the stream is the extensive printing establishment of Mr. Nevin, the buildings of which are capacious and furnished with every modern improvement in machinery.

The living is a perpetual curacy, in the diocese of Connor, and in the patronage of the Bishop, to whom the rectory is appropriate as mensal, but the whole of the tithes, amounting to £103. 19. 2¾., are given by him to the curate. The church occupies the site of an ancient monastery, said to have been founded in the 15th century by Mac Donell for Franciscan friars of the third order; it is a small but handsome edifice in the Grecian style, with a tower at the west end. There is a place of worship for Presbyterians in connection with the Synod of Ulster; also a national school, in which are about 90 children, and a private school of about 120 children. From a part of the churchyard being called the Nuns' Garden, it has been supposed that there was a nunnery here, but no account of such an establishment is extant.

You can see pictures of Lambeg (County Down) which are provided by: 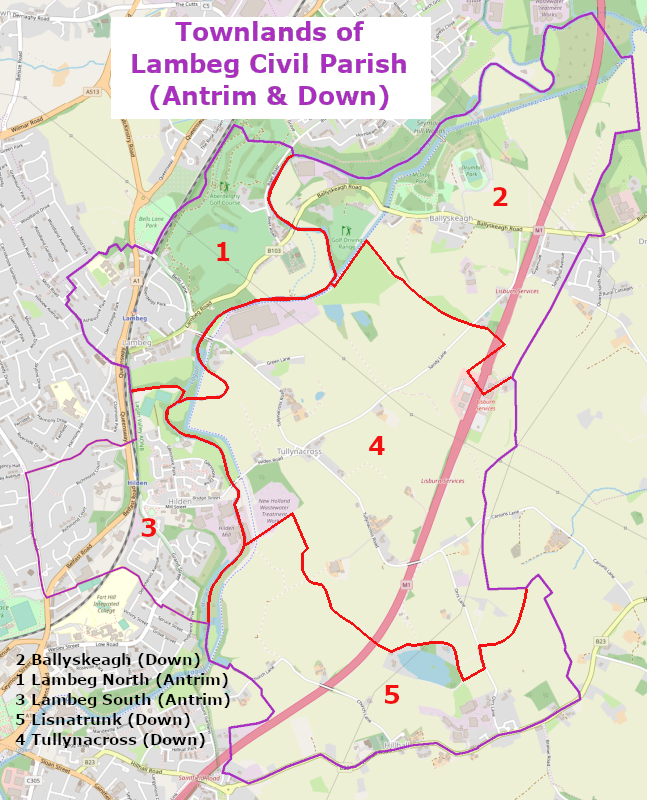