MOIRA, or MOYRAGH, or ST-INNS-OF-MOIRA, anciently called MOIRATH, a post-town and parish, in the barony of LOWER-IVEAGH, county of DOWN, and province of ULSTER, 13 miles (S. W.) from Belfast, on the road to Armagh, and 71½ (N.) from Dublin; containing 3801 inhabitants, of whom 787 are in the town. In 637, a sanguinary battle between the exiled Congal Cloan and Donald, King of Ireland, is said to have been fought here, which terminated in the defeat of Congal.

The parish, which is on the river Lagan and the Belfast and Lough Neagh canal, comprises, according to the Ordnance survey, 6096¼ statute acres, all rich arable land, under an excellent system of cultivation. It is at the western termination of a ridge of white limestone; there are many kilns always at work, and vast quantities of the stone in its natural state are annually sent away by the canal, and by land carriage, to distant parts. There are also quarries of excellent basalt, in great request for building; freestone is found of superior quality; and there are thin seams of coal in several parts, which are not worked. An excellent line of road has recently been opened hence to Lisburn, and other improvements are in progress. Moira was at one time celebrated for the manufacture of linen, large quantities having been made, sold, and bleached in the town and neighbourhood: its improvement was greatly attributable to the fostering care of Sir John Rawdon, and to the first Earl of Moira, who gave premiums, and otherwise encouraged the manufacture; but it has long been on the decline, and little is done in the market, the brown webs being chiefly sent to the market of Lisburn: yet there are some extensive manufacturers in and near the parish, who give out the yarn as piecework.

The town, though small, is well built, and remarkably clean; it is the property of Sir R. Bateson, Bart., and consists of one long spacious street, containing a court-house, a large handsome building, erected by the proprietor, in which a manor-court is held, every three weeks, for the recovery of debts under £5, by civil bill and attachment; petty sessions are also held here on alternate Mondays, and it is a constabulary police station. Fairs take place on the first Thursday in February, May, Aug., and Nov., for black cattle, pigs, agricultural produce, pedlery, &c. The principal seats are Waringfield, the residence of T. Waring, Esq.; and the glebe-house, of the Rev. W. H. Wynne. The Moira demesne is very extensive and well wooded, possessing many large and rare trees planted by the first Earl of Moira, with a noble avenue leading to the site of the castle, long since demolished: the demesne is now the property of Sir R. Bateson, whose residence is at Belvoir Park, in the adjoining county of Antrim.

The living is a rectory, in the diocese of Dromore, and in the patronage of the Bishop: the tithes amount to £351. 15.7. The glebe comprises 17 acres, valued at £51 per ann.; the glebe-house, a handsome building, was erected in 1799, at an expense of £710. 3., British currency. This was formerly part of the parish of Magheralin, and was made a distinct parish about 1725, shortly after which the church was erected, at the joint expense of Sir John Rawdon and the Earl of Hillsborough: it is a large and handsome Gothic edifice, with a square tower surmounted by a spire, in excellent repair, and, from its situation on an eminence above the town, forming a beautiful object in this rich and wellplanted district. In the R. C. divisions the parish is the head of a union or district, comprising Moira and Magheralin, in each of which is a chapel. There is a meetinghouse for Presbyterians in connection with the Remonstrant Synod, of the third class; also one for those of the Seceding Synod, of the second class; and there are places of worship for Wesleyan and Primitive Methodists.

There are parochial schools at Moira and Lurganville, supported by Sir R. Bateson, Bart., and the rector; a school for females at Moira, established in 1820 by Lady Bateson, who built the school-house, a large and handsome edifice with a residence for the mistress attached, and by whom also the children are principally clothed; and at Battier is a national school. These schools afford instruction to about 200 children: in a private school are about 80 children, and there is also a Sunday school. The interest of £200, equally bequeathed by Jasper and Samuel Waring, Esqrs., is distributed by the churchwardens to the poor housekeepers of this parish. The first Earl of Moira bequeathed a sum of money, which, with some other legacies, amounts to nearly £400, the interest of which is annually distributed among poor housekeepers. Moira gives the inferior title of Earl to the Marquess of Hastings; the castle was formerly the family residence, and was the birth-place of the late Marquess, whose father was buried here. He is said to have had the largest funeral procession ever seen in Ireland; it was attended by upwards of 800 carriages of various kinds, with a train of 4000 people, among whom 2000 hatbands and scarfs were distributed.

You can see pictures of Moira which are provided by: 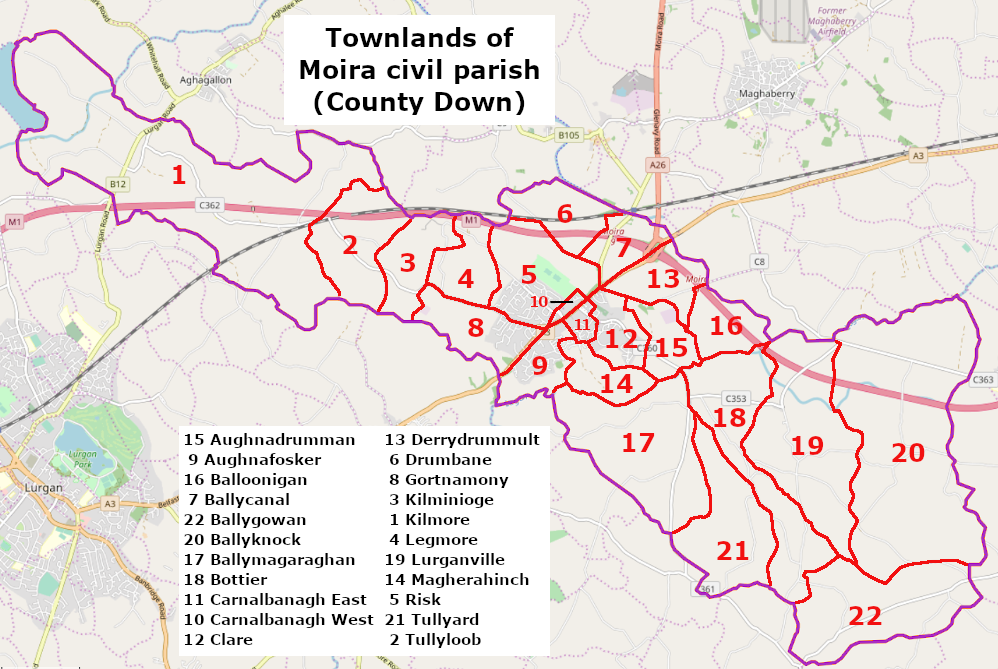