SAINTFIELD, or TONAGHNIEVE, a post-town and parish, in the barony of UPPER-CASTLEREAGH, county of DOWN, and province of ULSTER, 9 miles (N. W.) from Downpatrick, and 78½ (N. by E.) from Dublin, at the termination of the mail coach road branching from Dromore, by way of Ballinahinch; containing 7154 inhabitants, of which number, 1053 are in the town, which consists of one long street, intersected by a shorter one, comprising 213 houses, the greater number of which are built of stone and slated. At this place the first battle was fought in the north of Ireland during the disturbances of 1798, on June 9th, when the York Fencibles were beaten back and retreated to Cumber.

The proprietor and lord of the manor, N. Price, Esq., improved the town in 1802, when he erected a large market-house and hotel, since which time Saintfield has been rapidly improving, and is now one of the most flourishing towns in the county. According to the Ordnance survey, the parish comprises 13,333¾ statute acres, 280 of which are roads and waste, and 118 bog; the land is good and nearly all arable. The weaving of fine linen cloth, cotton cords, and hosiery, gives employment to a great number of the working classes at their own houses. Here is a chief constabulary police station; a manor court is held every third Saturday in the court-house, at which debts to the amount of £10 are recoverable; petty sessions are also held in the court-house on alternate Tuesdays. Mr. Price gave premiums for the encouragement of a market and fairs, so that they rank amongst the best in the North of Ireland; the market is held every Monday, and the fairs take place on Jan. 26th, the second Thursday (O. S.) in Feb. and March, the third Thursday in April and May, June 26th, July 30th, Aug. 26th, the third Thursday in Sept., Oct. 26th, the third Thursday in Nov., and the Thursday after Christmas. The principal seats are Saintfield House, the elegant residence of N. Price, Esq., situated on elevated ground near the town, of which it commands a fine view; Mill House, of J. McBurney, Esq.; and the glebe-house, of the Rev. H. H. Wolseley; and there are several excellent farm-houses. The living is a vicarage, in the diocese of Down, and in the alternate patronage of the Earl of Carrick and Viscount Bangor: the rectory is impropriate in the proprietors of the soil. The tithes amount to £612. 2. 2., of which £175 is payable to Viscount Bangor, £147. 1.4. to N. Price, Esq., £9. 4. 7½. to Lord Dufferin, and £280. 16. 2½. to the vicar. The glebe comprises 20¼ acres, valued at £25. 6. 3. per ann.; the glebe-house is a large and handsome building, erected in 1750 at the expense of the then incumbent. The church, in the town, is a large and elegant structure in the early English style, with a square tower, and is in good repair. In the R. C. divisions the parish is the head of a union or district, comprising this parish and that of Killincby, in each of which is a chapel. The parochial school in the town was built by N. Price, Esq., and endowed by him with an acre of land; there is a female school built by subscription and partially supported by the vicar; and there are 9 other public schools, in all of which are about 560 children; 11 private schools, in which are also about 560 children; and 11 Sunday schools. Hutcheson, the author of a work on Moral Philosophy, was a native of this parish.

You can see pictures of Saintfield which are provided by: 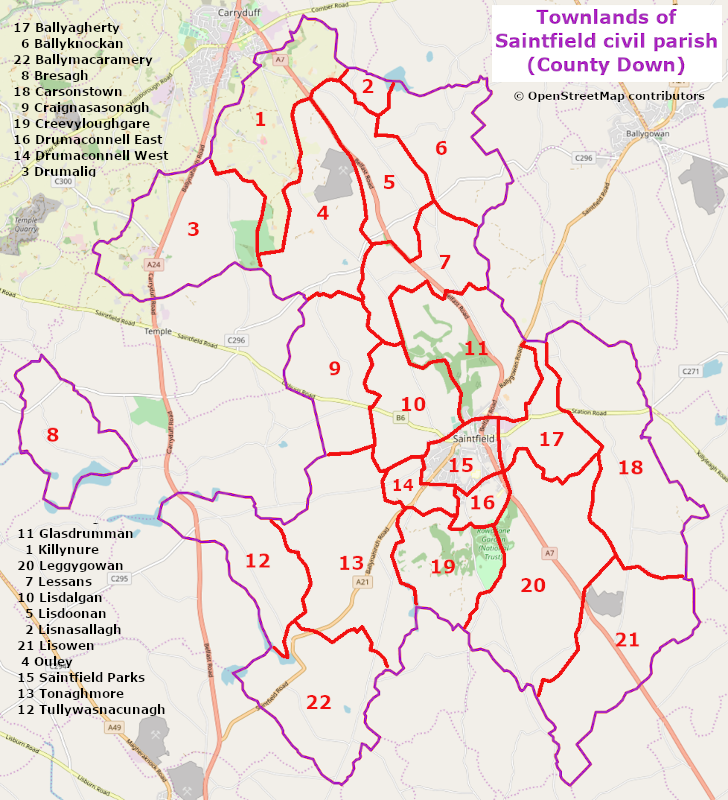