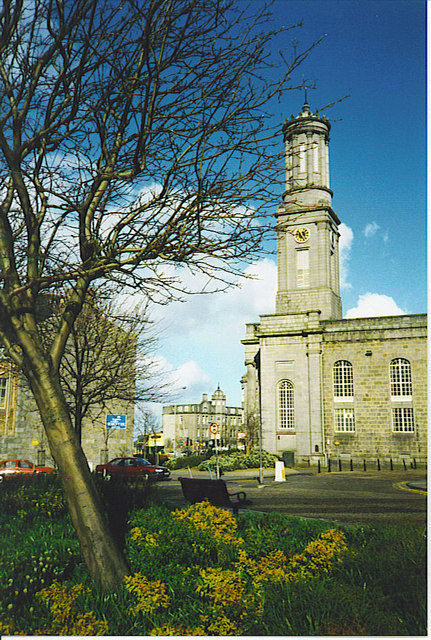 "The parish of North Kirk is situated within the town, and contains a population of 5381; the minister's stipend is £300, paid by the corporation. The church is a handsome structure of dressed granite, in the Grecian style, with a lofty tower, and an elegant portico of the Ionic order; it was erected in 1831, by the corporation, and contains 1486 sittings. There are a place of worship for Independents, a Roman Catholic chapel, an episcopal chapel dedicated to St. John, and one dedicated to St. Andrew, the latter a handsome structure in the later English style, erected in 1817, at an expense of £8000."

This Aberdeen landmark was built in 1829-30, arguably the best product of architect John Smith. On the corner of King Street and West North Street, the building was erected initially as the 'North Kirk' with a 'Tower of the Winds' steeple. Of course, it is built in granite and is now the Arts Centre, with a 350-seater auditorium. It is a Category A listed building.