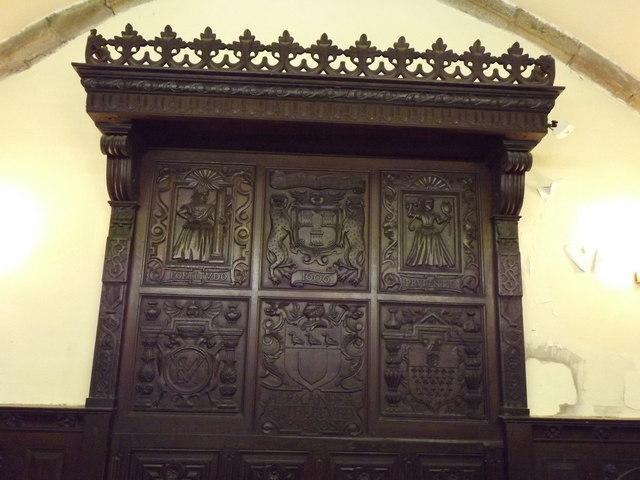 "The parish of the East Kirk, situated in the centre of the city, contains a population of 4798. . . The church, originally the choir of the collegiate church of St. Nicholas, was rebuilt about fifteen years ago, at an expense of £5000; it is a handsome structure in the later English style, eighty-six feet in length, and is separated from the West church, which formed the western portion of the old edifice, by the lofty arches of the tower. Externally, the two churches are connected, and embellished with an elegant facade of granite, 160 feet in length. The East church contains 1705 sittings. There are places of worship for the United Presbyterian Synod and United Original Seceders, and an episcopal chapel dedicated to St. Paul, erected in 1722, at an expense of £1000; also places of worship for Wesleyans, Glassites, Unitarians, and United Christians."

The Kirk of St Nicholas is a historic church located in the city centre of Aberdeen, Scotland. It is now officially known as the "Kirk of St Nicholas Uniting" as it has membership of both of the Church of Scotland and the United Reformed Church. It is also known as "The Mither Kirk" (mother church) of the city.

The building includes two sanctuaries under one roof (though only one, the West Kirk, is now used). Following considerable decay, the old nave collapsed in approximately 1742. A rebuilt church – known as the West Kirk – was built in 1755. The other section – the East Kirk – though it was still complete and retained a wooden medieaval roof similar to that which survives at King's College Chapel, Old Aberdeen, was rebuilt in 1837, by Archibald Simpson, and had to be again rebuilt following a fire in 1874. In the 20th century, declining congregations led to the union of the two churches and today only the West Church is used, the East Kirk is no longer used. Extensive renovation and archaeological work has taken place in the East Kirk. The foundations of earlier phases of the kirk, many medieval burials, and large numbers of architectural fragments are among the rich finds from this important site.